1.0 A unique custom with the moon: Tsukimi on Jyugoya

The moon was a mysterious planet floating in the sky. Ever since 20 July 1969, when the Captain Neal Armstrong and the Pilot Edwin Aldrin made the successful moon landing, moon has become a more familiar planet to human beings. The beauty of the moon adds a unique nostalgic characteristic to the spiritual culture of Japan, especially in autumn when the lower temperature eases off the lingering summer heat and air gets comfortably cool in the lengthening nights of autumn. 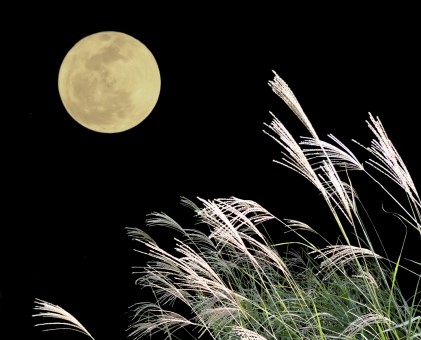 When Japanese people were very young, they must have heard about the story that goes as “Look up the moon. There are rabbits pounding steamed rice to make rice cake”. It is about “Jyugoya” (the night of fifteenth) that specifically means the full moon appearing on around the 15th of August in the old lunar calendar, which is around the 7th of September through the 8th of October in the present calendar with the exact date depending on each year. Besides, the way of appreciating Jyugoya is known as “Tsukimi” (moon viewing) (Shikinobi, n.d.).

According to one account, the aforementioned story originated from Jataka mythology in India. There were a fox, a monkey and a rabbit that were trying to help a starving old man, but only the rabbit could not get any food for him. Therefore, the rabbit jumped into the seething fire to sacrifice itself to satisfy the hunger of the man.  The man was in fact the disguised God named Taishakuten, and he reincarnated the rabbit’s soul in the moon out of respect to its good deed so everyone could see it from anywhere and learn from it (Chie-no Shoten, 2017).

The custom of Jyugoya appreciation is said to have started when it was introduced to Japan from China in the middle of ninth century. At first, it was an entertainment for the aristocracy where they enjoyed drinking sake, poetry, and music on the boat. What is interesting is that they appreciated the moon reflecting on the water surface, not looking up the moon itself in the sky. It was not until the seventeenth century that ordinary people started to share such an elegant event. Unlike the aristocracy, they took the event as the occasion to celebrate the successful harvest of rice and other crops (Shikinobi, n.d), which is inherited to the present day.

There are two symbols for the Tsukimi custom, which are easily available (Bite-Japan, 2006): 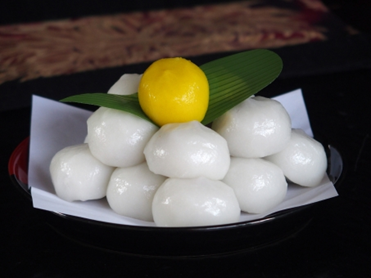 A dumpling, specifically made of rice. Generally, the fifteen of dango are piled up in a shape of pyramid. The number “fifteen” comes from that Jyugoya literally means the fifteenth night when the moon appears to be full. Dango is considered as offerings to God in prayer as well as appreciation, for good harvest.

It is decorated together with dango, which is also to pray for the good harvest of rice because it looks like an ear of rice. In some areas of Japan, Hagi (or bush clover) is decorated as meaning of chopsticks to be used by God to eat dango. Both Susuki and Hagi are meant to be a charm against evils as well.

Most of Japanese culture or old customs have a unique way of taking part in each event. With regard to Tsukimi, there are local communities that still practice some customs only for the day of Jyugoya. For example, “Mandakana” is one that is practiced in Nagasaki, where children are allowed to take the Tsukimi offerings at someone’s house without asking. Or in Akita, there is one called “Kataashi-Gomen”, meaning that you are allowed to take the offerings that are in the one-foot step distance (Iroha-Japan, n.d.). Because the Jyugoya or Tsukimi is considered a joyous moment, permissiveness for such rudeness is given in sharing the happiness within the community. 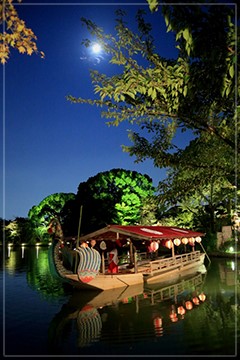 Furthermore, there are three outstanding moon viewing spots in Japan, which include Osawa-no-ike at Daikaku-ji in Kyoto, Sarusawa-no-ike at Nara Park in Nara, and Ishiyama-dera in Shiga. Particularly in Kyoto, there are various Tsukimi events to be held in September.

In addition, there are many festivals in appreciation of Jyugoya all across Japan, such as the one called Horinouchi-Jyogoya Matsuri in Niigata as well as Jyugoya-Taisai at Saruga Shrine in Aomori and Hyuga Jyugoya Matsuri in Miyazaki, amongst others. All customs and practices are inherited through generations to celebrate the good harvest.

Japan has many seasonal cultural events that are rooted in each local region. Participating in a Tsukimi event would be a good start to enjoy autumn season.

Japanese customs are often accompanied by unique food culture. Even with Tsukimi, apart from symbolic dango, it is arranged in a way just to make it more familiar to people in a daily sense. There are a few things named after Tsukimi: for example, Tsukimi udon or Tsukimi soba. They are noodles topped with an egg yolk which looks like the full moon. They can be found anywhere all year around. There is another food that might be more popular these days. McDonald’s Japan sell Tsukimi Burger as in the limited time offer during the season. Especially this year, they renewed the burger for the first time in 26 years since they first launched the product in 1991. This burger has an egg which designed the moon and sandwiched between buns. (McDonalds, 2017).

5.0 The beauty of moon viewing

It is very romantic that the beauty of the moon can be shared from anywhere in the world, which makes Jyugoya more enjoyable. It would be very pleasant pastime to spend time at the night of Jyugoya to simply appreciate the moon or to be thankful for the good health and happiness as in the traditional manner, or sharing the Jyugoya moon through the autumn sky with your loved ones living far away or even imagining what if there were rabbits actually living on the moon…