Kanamara Matsuri / かなまら祭り, One of Many Interesting Experiences Not to Miss in Kawasaki! | Guidable

Kanamara Matsuri / かなまら祭り, One of Many Interesting Experiences Not to Miss in Kawasaki!

What is Kanamara Matsuri? And Why You Shouldn’t Miss This Experience!

Kanamara Matsuri (かなまら祭り is the festival of the ‘steel phallus’, yes you read that right, this is not a festival for the faint-hearted. The festival is held on the first Sunday of April, in the city of Kawasaki at the Kanayama Shrine. There is a parade through the streets, where you can get your first glimpse of the majestic ‘iron phallus’, a large black penis that is carried in a boat-shaped portable shrine by a group of strong men and women, called the Kanamara Funamikoshi. 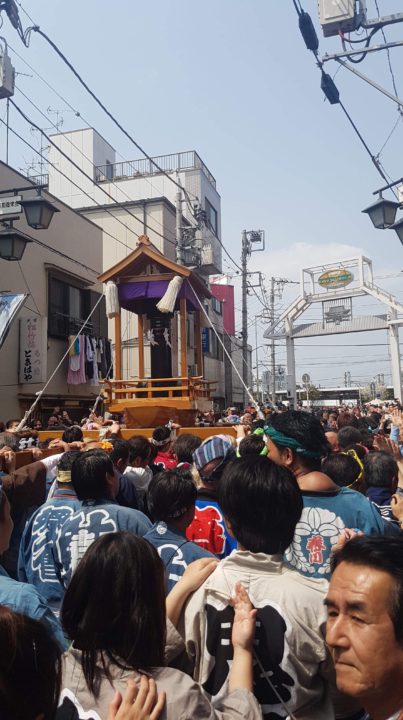 After the Kanamara Funamikoshi, comes the more well-known phallus, called “Elizabeth Mikoshi”, named after the Drag Club in Tokyo “Elizabeth Kaikan”. This brilliantly, pink phallus used to be carried by only club members but now they have allowed members of the local Mikoshi association carry it also, and anyone who carries the Mikoshi, has to abide by the rule that if you are a male carrier you must dress up as a woman, and if you are a female carrier you must dress up as a man. Then there is the last phallus “Kanamara Omikoshi” the oldest of the mikoshi, housed in a large square roofed portable shrine. This is a small wooden phallus in the middle of the shrine. 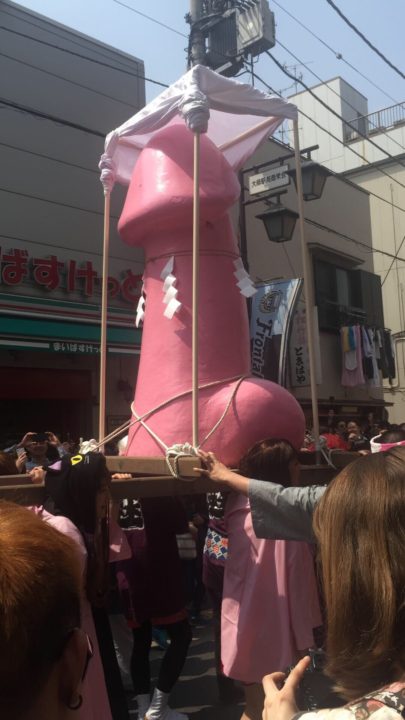 Within the parade, you are also treated to many traditionally dressed individuals and eccentric personalities. You need to make sure you get there earlier than the 12 pm start, due to the popularity of the festival in recent years, the streets can get packed. There is one train station (Kawasaki Daishi Station) that is directly across from the start of the Parade, this station is extremely busy, so always take into account how squished things will get. We were very crowded on the train, and if you are not comfortable with tight squeezes and pushing, then catching the train might not be the best way to get there.

History of the Kanamara Festival

The Kanayama Shrine can be traced back as far as the Edo Period (1603-1868). Back in the day, Kawasaki used to be a spot where travelers would stay if they were making their way along the main road between the Eastern Capital of Edo to Kyoto. Many women who worked at the inns (as maids and prostitutes) used to go to the Kanayama Shrine to pray to the God’s to be protected from diseases and misfortune. The Kanayama Shrine has long been associated with sex. The two God’s that they would pray to, that are enshrined in Kanayama, are the gods of mining and blacksmiths (Kanayamahiko and Kanayamahime). Which is a little confusing, as it is hard to connect the two ideas. But the legend goes, that the 2 God’s healed the Shinto Goddess Izanami after she gave birth to a Fire God. Since then, people prayed to them for protection from Childbirth, STD’s, etc, because of this myth.

Another legend for this shrine is that a jealous, sharp-toothed demon hid inside the vagina of a young woman that he fell in love with, and bit off the penis off her first husband and then again to her second husband. After the second time it happened, the young woman went to seek help from a blacksmith, who created an iron penis for her, which she used and the demon foolishly went to bite it and broke all of his teeth off. This resulted in the demon leaving the woman alone, and hence why the iron phallus is enshrined in the Kanayama Shrine from that point onwards.

One of the best outcomes of this festival is people being able to stop the discrimination surrounding Sexually Transmitted Diseases. Until recently people suffering from Sexually Transmitted Diseases would go to the shrine in the dark of night and pray, so as not to be seen. This resulted in the Kanayama Shrine parishioners to initiate the festival where anyone would be able to enjoy it in the light of day, and any profits raised from the event goes to HIV research.

The Kanamara Festival started in 1978 and has grown significantly (pun not intended) due to the many foreigners posting photos of the giant pink penis (Elizabeth Mikoshi) being carried down the street, in a small city in Japan. Now you can get crowds of up to 30,000 people.

What Can You Do at this Festival?

Not only should you watch the street parade, which was made even better by the enthusiastic carriers, as they chanted encouraging words whilst they heaved the phallus down the street in the blazing sunshine, make sure you visit the Kanayama Shrine and send a prayer up to the God’s to let them know you are (hopefully) STD free and healthy. Once the parade has finished, be sure to go inside the Kawasaki Daishi Temple, where there were many food stalls set up with all kinds of delights. Containing, of course, a lot of penis-shaped treats, but also common Japanese festival foods, including “okonomiyaki”, Japanese noodles, even Osaka’s famous “takoyaki”, (octopus balls). There are also beautiful cherry blossom trees in full bloom with the festival being in the middle of Spring, which makes for beautiful photos. 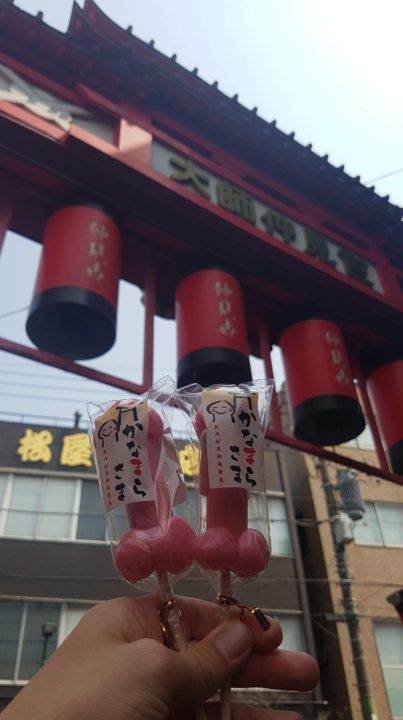 Walking through the Temple, you will come out the other side onto the street markets. This is where the fun begins! Here you can get all sorts of trinkets and sweets. Not only do they have the typical penis lollipops, but they also sell vagina lollipops too! You can also buy a very tasteful crystal penis or necklace from certain vendors, which are in a way very beautiful. Near the end of the street, there are the chocolate covered bananas, and big sausages on sale, which are delicious! 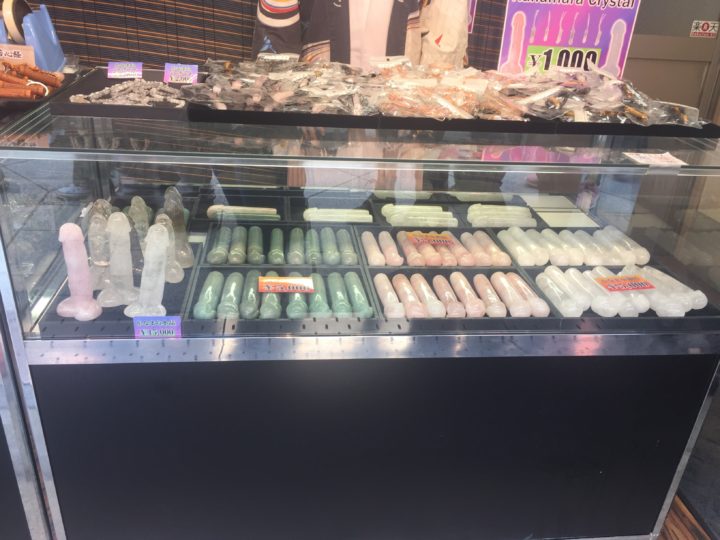 If you continue down the street (following the crowds of people, which helps if you don’t quite know where to explore), you arrive at a big park. This is called Daishi Park, it is a beautiful gigantic park, and this is where the giant phalli are laid to rest for a bit, after all of their hard work. There are also more stalls here that are worth checking out. More of the types of souvenirs that you can actually take home (magnets, t-shirts, chopstick blocks, towels, etc). There were also more food stalls selling sausage snacks and beers. We were very lucky with the weather, so a beer was the perfect way to toast the festival. As it was still Sakura Season they were selling Pink Sakura Beer, which was perfect to raise a cup to the Pink Phallus. 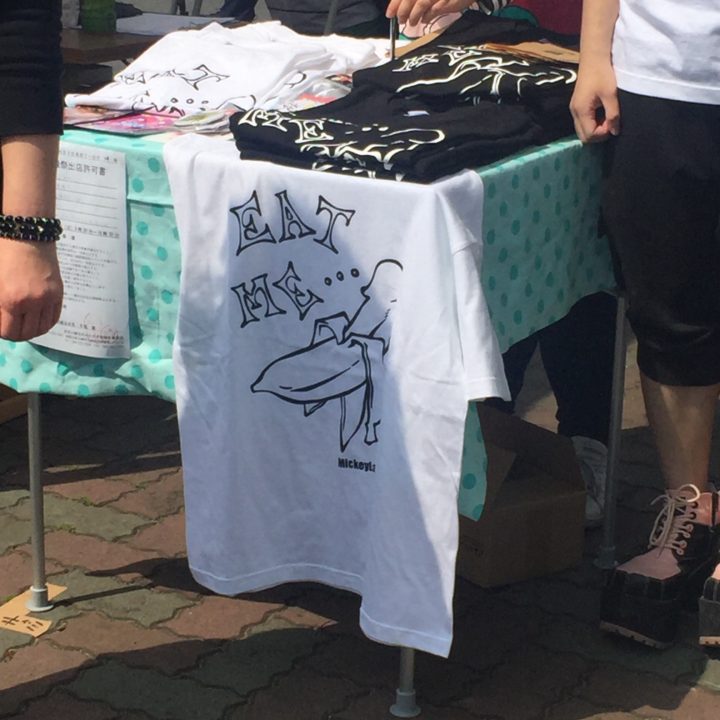 How to Get to the Festival? 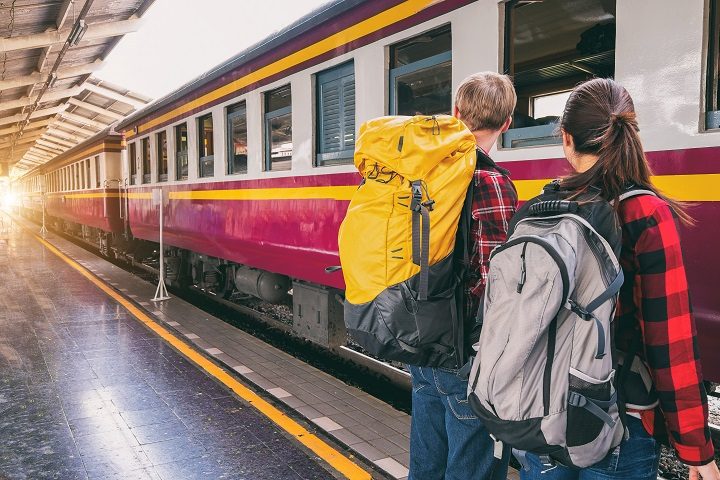 To get the Kanamara festival, we decided to catch the train (as mentioned at the start, not for anyone who does not like being squished), we caught the train to Shinagawa Station, with the Yamanote Line. Once you have arrived at the station, you will need to find the Keikyu Line which will take you towards Keikyu- Kawasaki Station. Again, I cannot say it enough but be prepared for a big crowd of people. Once we arrived at Keikyu-Kawasaki Station, there was barely room to stand to wait for the train, it was packed, and be prepared to miss a couple of trains, until you are able to make it on. Bare in mind, we were getting to the festival for about midday, so if you are an early, wise bird and decided to get to the festival early, then hopefully it won’t be as busy as what we encountered. At Keikyu-Kawasaki Station you then need to hop onto the Keikyu-Daishi Line, this will take you to the Kawasaki Daishi Station, where you can watch the parade. Once you exit the station, you just need to cross the road and get a spot, we found a spot right outside the Pachinko Building and ended up being really lucky with our view and timing. The Parade starts around 12 pm, so we were there in perfect time. We weren’t able to find an easier route via bus for this trip, but if you are not for the train life, then it’s best to have a look into this before you decide to go to this festival, as the train seemed to be the easiest way to get there.

Other Spots Not to Miss While in Kawasaki! 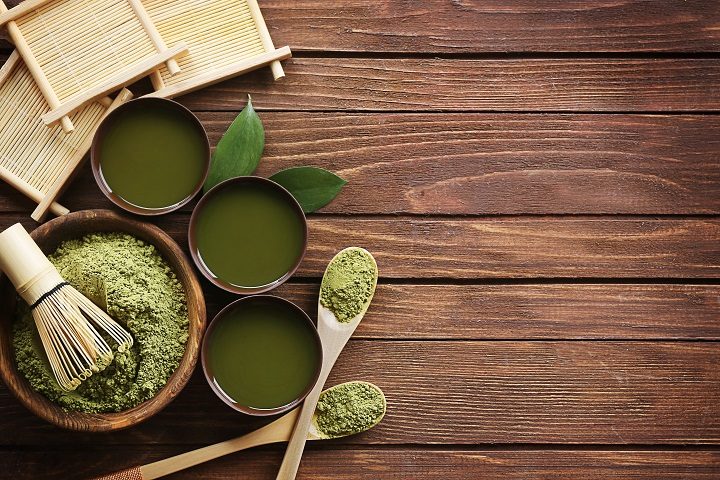 The Morimori Festival in Kawasaki is a food festival that highlights the unique culture of Kawasaki through food and entertainment. This festival is located about 10 minutes from the JR Kawasaki Train Station, by foot.

The Festival provides exciting entertainment experiences such as:

Their food experiences that you should not miss are:

If you have the opportunity to attend cultural festivals in Japan, please do, every festival has something memorable about it, and differs from one another. 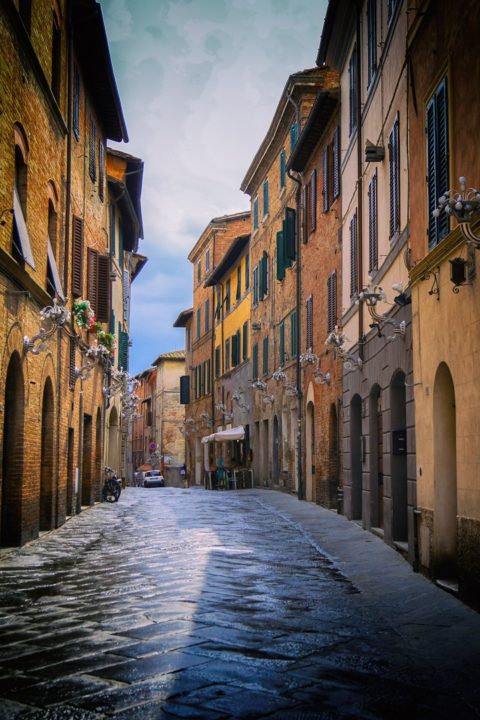 This beautiful hidden area is only 5 minutes from the Kawasaki Station! La Cittadella is a facility that gives you a glimpse into Italian life All of the small walkways mirror that of European streets, with little boutique stores and even a little chapel!

a restaurant where you can have authentic Tuscan and Chianti food. Such as pizza with a mochi-like texture, salami, and ham. Not to miss!

“a small cheese shop”, 40 different kinds of cheese from around the world, there is also cheese alternative Tororo hot raclette, which you can enjoy with wine and other beverages.

a beauty store that you can create your own perfume! Or you can have the store manager match you with a scent they think suits you best.

an open Live Bar. Talk live and acoustic live nights are held here regularly, so check to see what might be happening when you decide to visit! 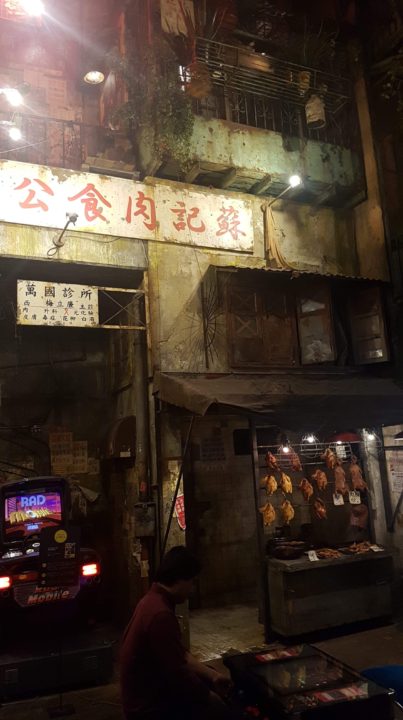 Anata no Warehouse Kawasaki is an arcade building styled after a city in Hong Kong called the Kowloon Walled City. The outside of the arcade is made to look like an old rusting building, and in the entrance, there is a big automatic door, which as you step up to it makes a loud, rushing wind noise which can scare the bejeezus out of you! (Trust me). You then walk down a small, scary hallway, and you can either go up the elevator or the escalator. I would suggest the escalator because then you can see all of the old posters stuck all over the walls.

There are 5 floors to this arcade, which include a Billiards and Darts Floor and an Internet Café. The best floor to experience the Walled City theme is the first and second floor. The vending machines have been fashioned so they look like they have been sitting there for years, and never dusted. There are fake food stalls with cooked ducks swinging off hooks, all the while you can hear the noises of the arcade games in the background.

Which of these Kawasaki Experiences are You Not Going to Miss?

Since the Kanamara Festival will now not be back until next April, you need to put it down on your calendar for the next time! But La Citadella and Anato no Warehouse are always open to being viewed! I would highly recommend it!