The Secret World of the Japanese Organized Crime: Yakuza | Guidable

The Secret World of the Japanese Organized Crime: Yakuza

Japan is well-known for its safety with Tokyo being the world safeties city and Osaka being third. Still, it does not mean that crime does not exist in Japan. Not so widespread as Chinese Triads or Italian Mafia, the organized crime does exist in Japan and they call themselves Yakuza. You are probably familiar with them through news or popular media like video games or movies. With articles, I’d like to go a little deeper than what is presented in the media and introduce you to the origins of the organization, its structure, the situation it is in today, and representation in the popular culture. 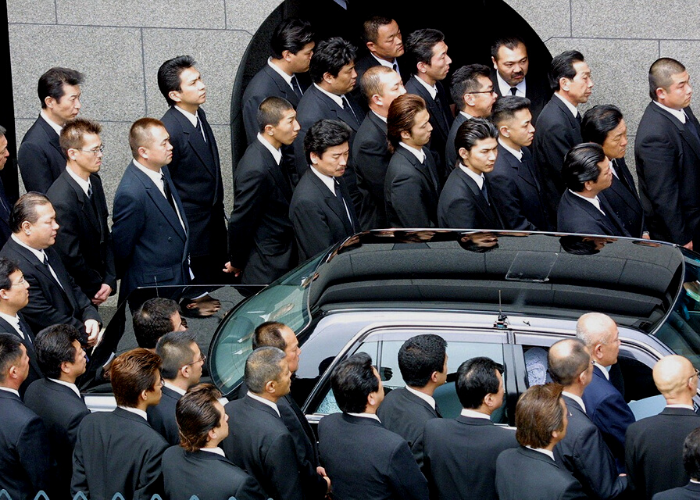 Edo era writer Nobuyo Kitamura points out that previously, the word “Yakuza” meant “not useful thing” yakunitatanumono (役に立たぬもの) or “boring person” tsumarununingen (つまらぬ人間). It might originate from the traditional Japanese card game called Oicho-Kabu where the 8-9-3 card combination (pronounced ya-ku-sa in Japanese) was the worst possible one.

Yakuza themselves push the theory that they are descendants of machi yokko, a group whose goal was to guard villages from bandits. However, experts believe that the Yakuza’s origins can be traced down to two groups that existed in the Edo period of Japan, that is Tekiya (peddlers) and Bakuto (gamblers). The first ones were a group responsible for protecting stalls and its owners during Shinto festivals. They were officially recognized by the government. The last ones were an illegal gambling group. It was them who brought elaborate tattooing and Yubitsume (指詰め, “finger shortening” as a sign of apology) to Yakuza. 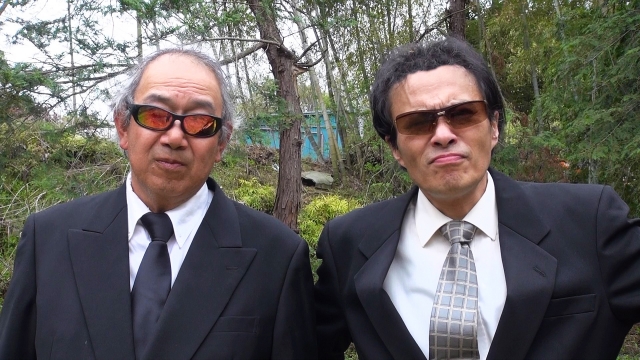 Yakuza’s structure is based on the tradition of oyabun-kobun, the system where a usually younger person or kobun (子分; lit. foster child)  assume obligations that are traditionally associated with close family members in relation to oyabun (親分, lit. foster parent). There are different rituals in oyabun-kobun including one where “child” and “parent” drink sake from one sake cup. It is important to notice that oyabun-kobun is not exclusive to the Yakuza world, but present in the Japanese culture in general.

At the top of the Yakuza group is oyabun or kumicho who gives orders to his subordinates, the kobun. He has an adviser saiko-komon whose responsibility is to advise kumicho on a wide variety of things. The second chief in command is wakagashira, who governs several gangs in a region with the help of a fuku-honbucho who is himself responsible for several gangs. The regional gangs themselves are governed by their local boss, the shateigashira with wakagashira-hosa (underlings) and kumi-in (soldiers). Yakuza employs white-collar workers like komon (specialist staff), hisho (secretaries), kaikei (lawyers) and shingiin (accountants) as well. 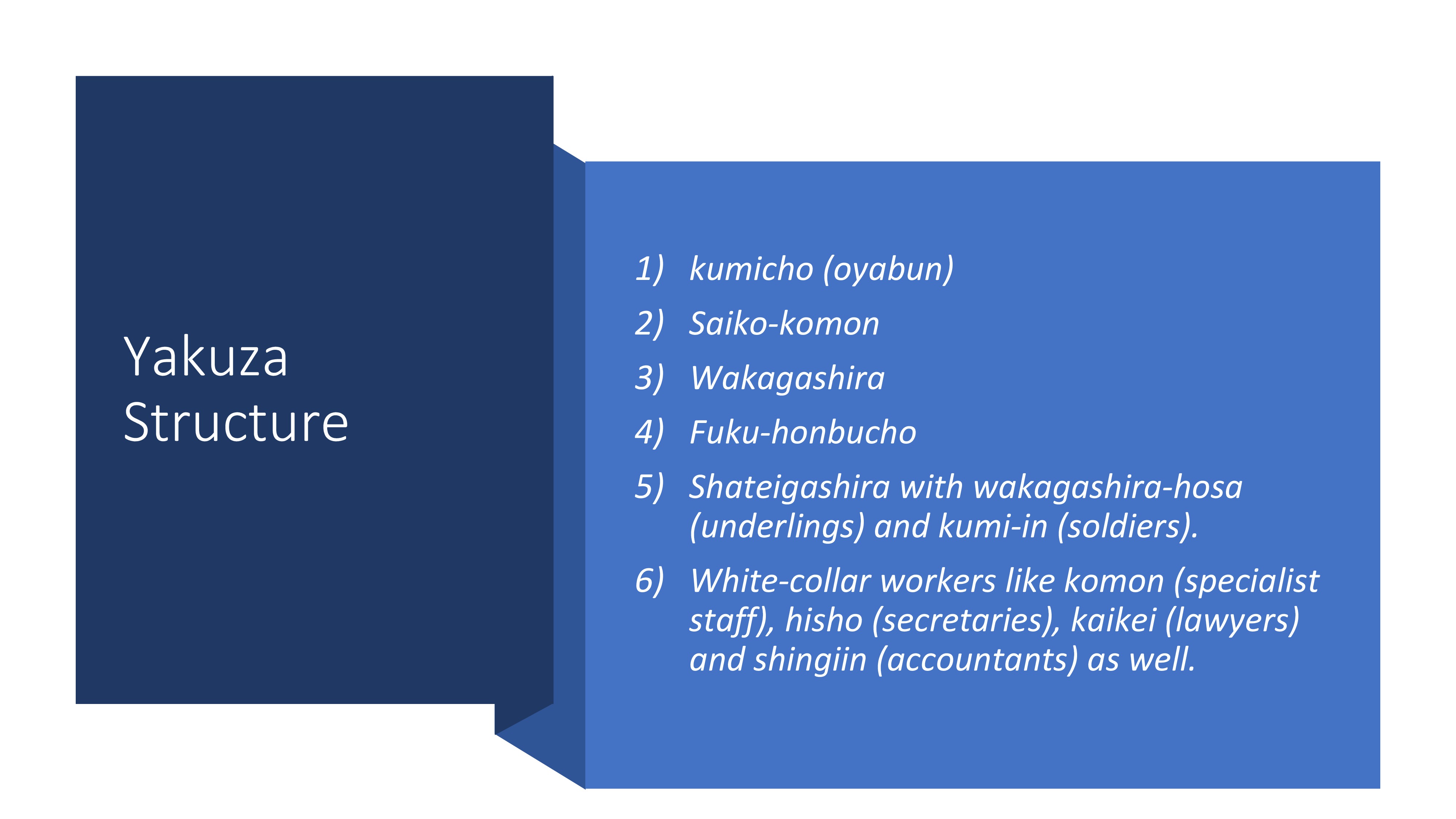 Yakuza are involved in all kind of illegal business including prostitution, gambling, firearms smuggling, and drugs. In addition to it, they harras not only small companies with the promise of their “protection” but big companies too which is called sokaiya. They are involved in the real estate business as well.

Kyushu has been the Japanese region with the biggest number of Yakuza members and criminal groups. The bosses of the two most powerful clans in the infamous Yamaguchi crime family Shinobu Tsukasa and Kunio Inoue came from Fukuoka.

Yakuza do not forget about their code of honor or zingi (仁義). For example, they help Kobe people after a devastating earthquake in 1995 by sending tracks and even one helicopter with disaster relief goods. They did the same in 2011, after the Fukushima triple disaster in Tohoku. The latest example of the Yakuza’s honor is a refrain from participating in bank transfer scams to let people recover from the COVID.

Today, less and less young people see the Yakuza member path as something attractive. According to Nippon.com, total members of designated bōryokudan organized crime gangs fell by 2,300 from 2018 to a new record low of 28,200 as of the end of 2019. This is the fifteenth consecutive year that numbers have fallen. Currently, there are 14,400 gang members 14,400 “associate” members, the lowest number since 1958. Just like the Japanese population is getting older, so does Yakuza. At the moment, 51.2% of yakuza members are 50 years old or older.

Yakuza had become a part of the Japanese popular culture a long time ago. One of the first examples of it is the Battles Without Honor and Humanity series (仁義なき戦い, Jingi Naki Tatakai) the first film of which was released in 1973. In contrast to the previous yakuza “ninkyo” films, Battles depicted Yakuza’s life as much less glamorous and crueler. The yakuza films gained wide recognition thanks to Takeshi Kitano, an acclaimed Japanese director who made internationally recognized movies like Sonatine and Hanabi. His latest project was the Outrage trilogy where he toned down his famous sense of humor, making films much darker than his previous ones.

Another popular media product that depicting the Yakuza life is the Yakuza video game series. It tells the story of Kazuma Kiryu who tries to break up with his yakuza life and start a new one. There are 10 games in the series where the first 9 were made in the beat-em-up genre but the latest one Yakuza: Like a Dragon turned unexpected turning into an RPG. The series’ exceptional humor still remains though and judging by the trailers, authors double down on it.

Surprisingly, there is a manga series made in yaoi or “boys’ love” genre called Saezuru tori wa habatakanai (Twittering Birds Never Fly), presenting a story of masochistic yakuza underboss and his bodyguard.