Already across social media, people have begun posting online about their favourite snow photo spots in Japan. Here are a few of our favourite photo spots across Japan and our suggestions on the best time to go!

If you’re looking to upload some great photos of Japan’s beautiful winter scenery, then check out the photogenic locations below! from Toyama to Nagano, you’ll be trying to visit all of these places before you know it.

Shirakawa-go (白川郷) is a UNESCO World Heritage Site and probably one of Japan’s most well-known snow photo spots. Since it sees some of Japan’s heaviest snowfall, if you visit during the winter months, you won’t be left disappointed if you’re looking to see snow! 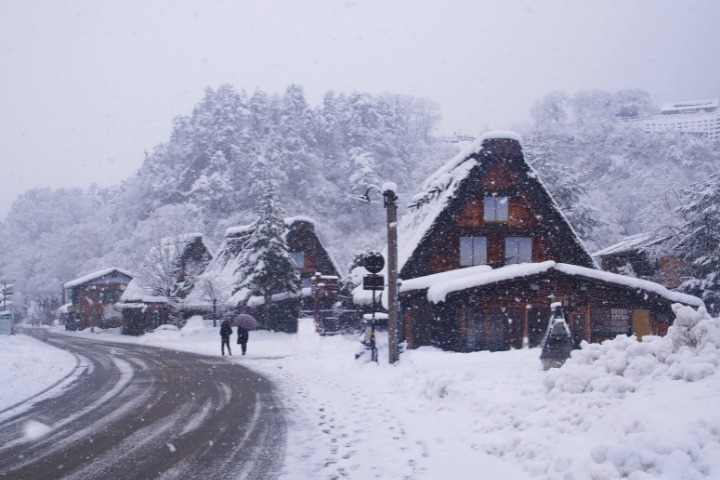 Located near Takayama in Gifu Prefecture, as soon as the snow begins to pile up, it becomes a hot spot for tourists, often attracting large groups of people all crowding to take photos of the traditional gassho-style houses.

On certain weekends in January and February, Shirakawa-go holds their annual Winter Light-Up Event, where the village is lit up for a few hours in the evening, transforming the town into a beautiful winter landscape. However, due to the event’s huge increase in popularity, the town has had to put a limit on visitor numbers in place, meaning that those looking to visit Shirakawa-go’s Winter Light-Up Event need to reserve in advance via a tour. 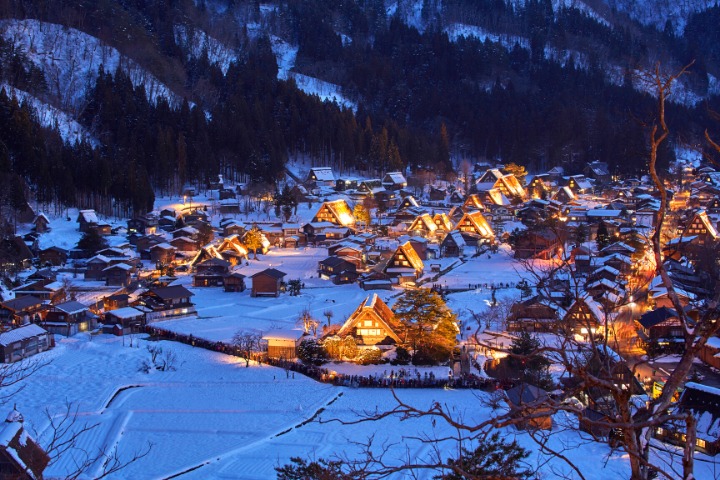 Best Time to Visit: Snow falls from December to March, however, if you’re looking for beautiful snowy views, it’s best to go from the end of January. You should note when planning that heavy rainfall may block access to the village.

How to Get There: Visitors are able to visit either by public transport or by car, however during the Light Up Event, access is only available for those who are part of an authorised tour. For more information on getting there, please look at the Shirakawa-go tourist information website.

Nakasendo, which literally translates to ‘central mountain road’, was one of two roads that used to connect Edo (Tokyo) to Kyoto. The most famous part of the Nakasendo trail runs between Magome and Tsumago, two well-preserved ‘post-towns’ (places where travellers could rest and restock).

A third well-preserved post-town, Narai-juku, also runs along the Nakasendo trail, however, it’s a distance away from Magome and Tsumago, which are only 10km apart.

All three can be visited on one day with a JR pass that included the JR Shinano Limited Express line, but if you are just looking to visit Magome and Tsumago, the most popular of the three, you can catch an infrequent direct bus between the two or walk via the 1-hour 45-minute hiking route. 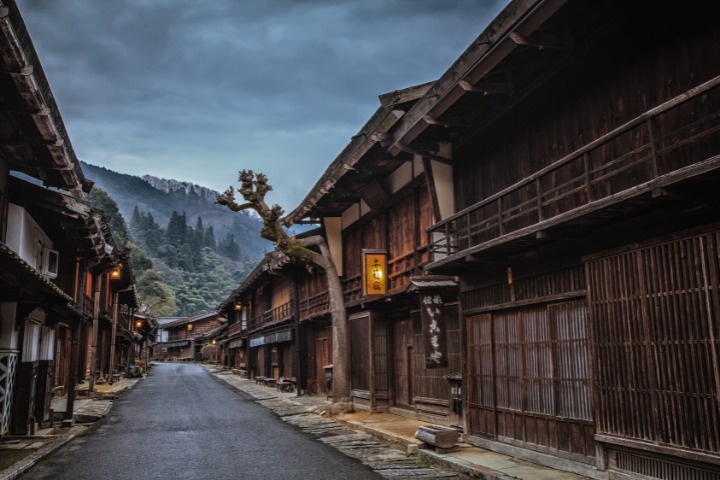 Although Nagano is well-known for its heavy snowfall, Kiso Valley is located in the south of the prefecture, meaning that it doesn’t see even close to the amount of snowfall as other regions in Nagano. This means that even if you go during the winter, there is a chance you may not be able to catch any snow.

However, as Nakasendo’s Peak Season begins in the Spring, if you’re lucky enough to visit when it does snow, you will be able to capture beautiful snow-filled photos without the crowds of tourists!

How to Get There: Visitors can get there via Nagoya Station or Shiojiri Station (south of Matsumoto, Nagano). For more detailed information, check out this website.

I’m sure many of us have heard of this famous winter location! And if you haven’t heard of it you’ve surely seen it online somewhere!

Whilst in Japan, it’s well known for being the set of NHK’s popular TV show Oshin, this building is more likely to remind foreign visitors of the bathhouse out of Studio Ghibli’s Spirited Away. 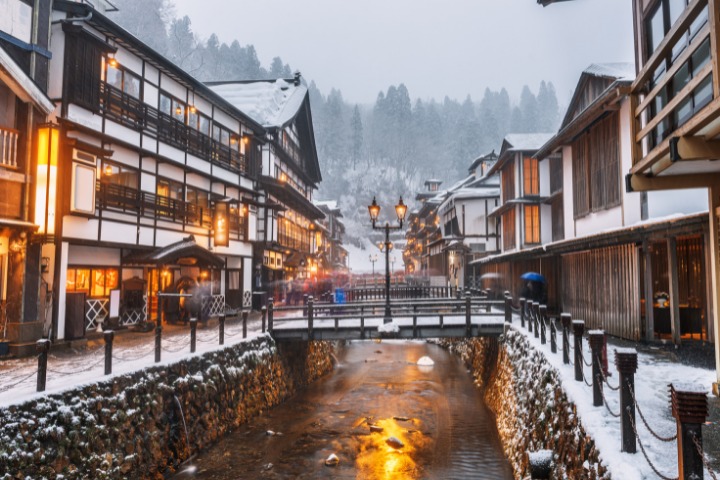 Another highly popular winter photo spot, those looking to visit Ginzan Onsen (銀山温泉) should definitely prepare well in advance because hotels and Air BnB’s in the area get snapped up faster than you can say Ginzan Onsen!

Best Time to Visit: December-March. As Ginzan Onsen is an extremely popular snow spot, you should book around a year in advance if you’re planning to stay overnight!

How to Get There: Visitors are able to visit either by public transport or by car, however, visitors who arrive by car are asked to park in a designated parking lot outside the town centre.

From Oishida rail station, catch a bus direct to Ginzan Onsen (please note that buses only depart every 60-90 minutes).

Located in Nagano, the Jigokudani Monkey Park (地獄谷野猿公苑 jigokudani yaen koen) is a popular spot where lovers of monkeys, onsen and snow can see all three in one place!

Jidokudani loosely translates to ‘Hell Valley’ in English, and is a common name for areas that see a lot of volcanic activity, like the homonymous Jigokudani crater in Hokkaido. 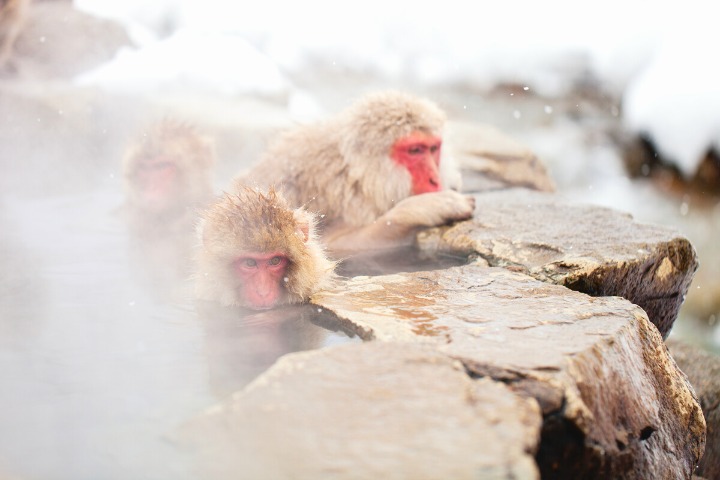 Unlike the Kiso Valley, the Jigokudani Monkey Park which is located in the northern part of Nagano, usually sees snow from December to March, meaning there’s plenty of time to make a trip to the park.

While you can not touch or feed the monkeys, it’s great to watch them interact with each other and play around in the hot springs. They also make for great photography subjects!

Best Time to Visit: Snow falls from December to March, however the best time to visit the park is from January to February.

How to Get There: The easiest way to get to the Jigokudani monkey Park is to get the bus from Yudanaka Station, Shibu Onsen or Nagano Station before getting off at either the ‘Kanbayashi Onsen’ or ‘Snow Mokey Park’ bus stops depending on the bus route, and walking for 25-40 minutes to the park.

If you go via Nagano Station, there is an express bus (Nagaden) that will drop visitors near the park for 1500 yen.

Ouchi-juku (大内宿), another post-town similar to the ones in Kiso Valley, is another great winter photo spot for Japanese history aficionados.

Lined up along a wide main street, straw-thatched houses have been restored to look as they would have done in the Edo period (1603-1867), with telephone wires and cables buried underground to add to the sense of having stepped back in time.

Inside these buildings are a variety of small shops, restaurants and lodgings. Inside some of them, visitors can see some of the features of older Japanese houses such as Irori, the large fireplaces found in traditional Japanese homes. 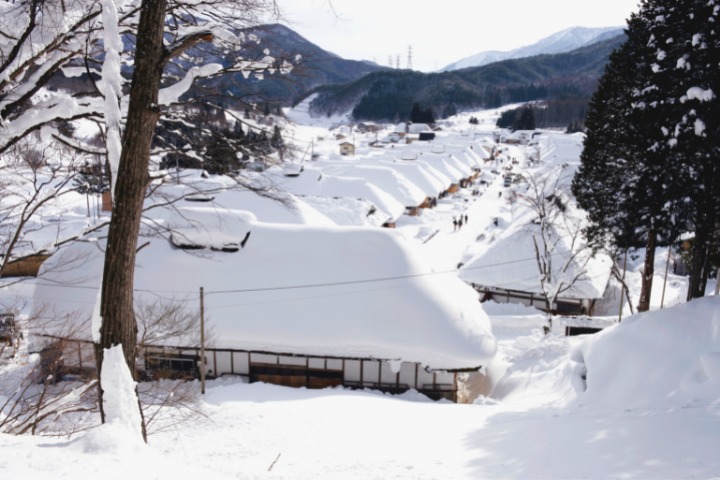 Ouchi-juku boasts both a temple and a shrine. The shrine is a little off the beaten track, but it offers visitors a sense of serenity hidden away from the busier main street.  The temple sits at the end of the main street and up a flight of stairs. Once at the top you can get a panoramic view of the town that you don’t want to miss out on!

Every year, during the second week of February, the town holds its annual Snow Festival, however, due to the rising number of COVID-19 cases in Japan, the Snow Festival has been cancelled for this year. Check out this website for more information on Ouchi-juku’s Snow Festival.

Best Time to Visit: Dec-March. The snow is usually heaviest in January, so you should exercise caution if going during this time.

How to Get There: From Aizu-Wakamatsu train station, get the Aizu line to Yunokami Onsen Station before getting the Saruyu-go bus or a taxi to Ouchi-juku.

This one is for those who want to make the most of the snow! Measuring a whopping 37 kilometres long, the Tateyama Kurobe Alpine Route (立山黒部アルペンルート) runs between Tateyama (Toyama) and Omachi (Nagano). Impressive! 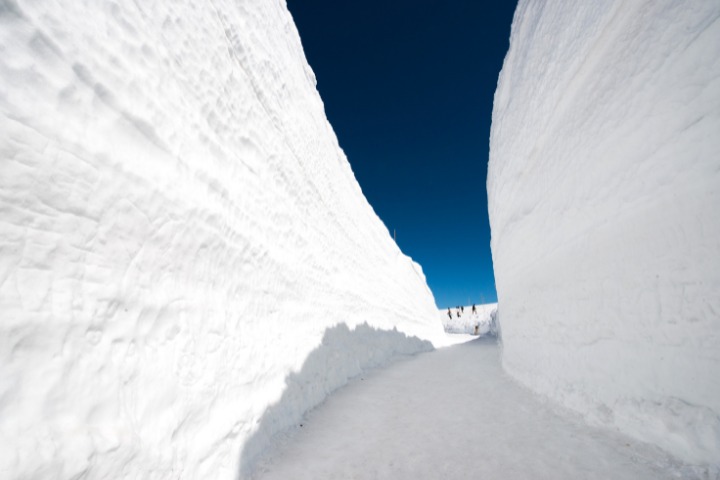 The Tateyama Kurobe Alpine route is crossed using a medley of transportation methods including cablecars, a ropeway and a tunnel trolley bus. The most famous part of the route, which crosses the Northern Japan Alps, is the snow corridor between Migadahara and Murodo which can reach up to 20 meters in height.

The whole route takes about 6-7 hours but can be even longer during peak times, so make sure to bring warm clothes and the appropriate footwear for lots of walking! 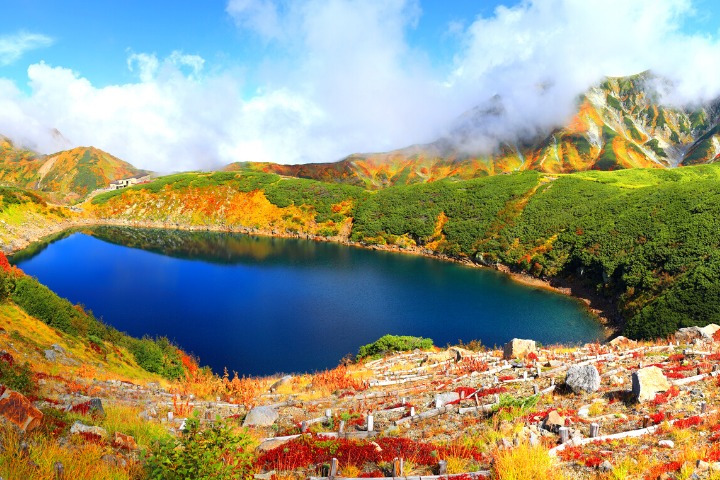 The main attraction of Tateyama Kurobe Alpine Route, however, is the Chubu Sangaku National park, which offers beautiful views of a lake and mountain range.

The route is open from April 15th to Nov 30th this year.

Best Time to Visit: For those who want to experience the Snow Corridor, the best time to go is when the route first opens, in April and in May. However, there are many perks to going through the summer and autumn too, such as seeing the Autumn leaves on the route through October and November!

How to Get There: Visitors should arrive by public transport as a large part of the Tatayema Kurobe Alpine Route crosses through the Chubu Sangaku National Park, meaning that private cars are not permitted to enter.

For detailed information on how to get there, please take a look at this website.

Which of These Photo Spots in Japan Would You Visit?

It’s exciting seeing Japan in the snow! From traditional Japanese houses covered in snow to snow walls reaching up to 20m high, there’s so much to see when it comes to winter in Japan.

If you do plan on travelling to see one of these beautiful snow scenes, we recommend taking public transport when you can to avoid the risk of road closures and traffic due to the snow.

Where will you be heading first?