Hirohiko Araki is one of Japan’s most well-regarded Manga artists who has been recognized internationally for his unique designs as well as within Japan for his magical storytelling abilities. Araki, who is originally from Sendai, Miyagi, has been drawing manga since his first year of high school and is best known for his long-running series, Jojo’s Bizarre Adventure, which was first published in Weekly Shōnen Jump in 1987 and has sold over 100 million copies domestically.

In honor of the 30 year anniversary of the first publication of Jojo’s Bizarre Adventure, the National Art Center in Nogizaka has opened their exhibition “Hirohiko Araki JoJo Exhibition: Ripples of Adventure,” which will run until October 1, 2018. Tickets start at 1,600 yen for adults with some discount offered for students. The National Art Center is open from 10:00 AM until 6:00 PM, with the last admission 30 minutes before closing, and it is always closed on Tuesdays. Don’t miss this chance to experience original and modern Japanese art while in Japan! 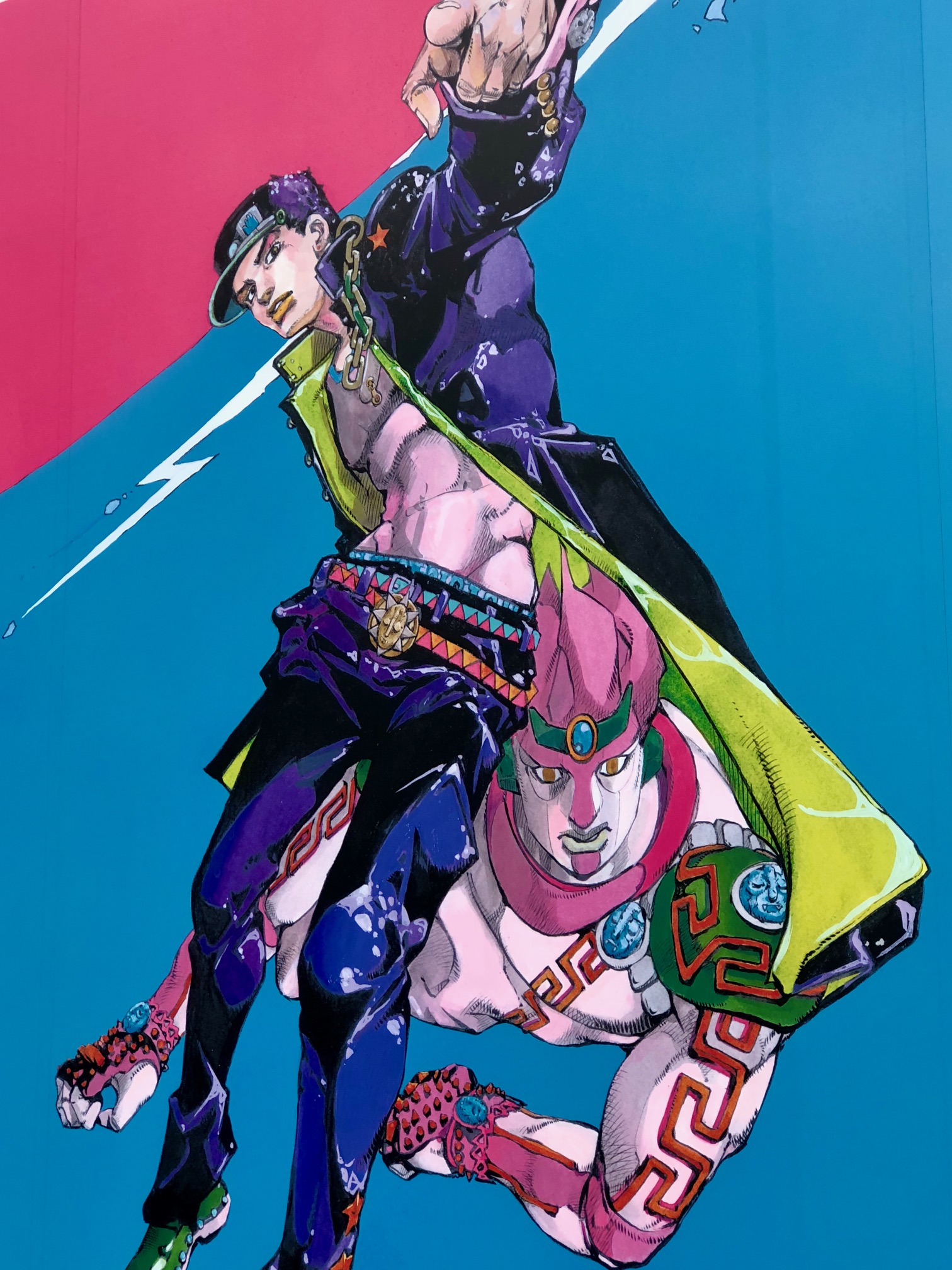 What is Jojo’s Bizarre Adventure?

For those who are not familiar with Jojo’s Bizarre Adventure, it was originally published in Weekly Shōnen Jump from 1987 until 2004. It consists of 8 parts which chronicle the Joestar family and their biggest supernatural foes. Boasting more than 121 volumes currently, this manga is one of the most voluminous in history and it is well received in part for depicting a family set in the late 19th to the 21st century, with frequent references to Western popular culture, including rock music. Moreover, Araki’s art is magically bizarre, as the title suggests, with vivid colors, futuristic style, and funky settings. This manga is perfect for people who are new to manga or want to understand it and appreciate it as an art form, and what better way to experience it than in a commemorative exhibition in Tokyo? 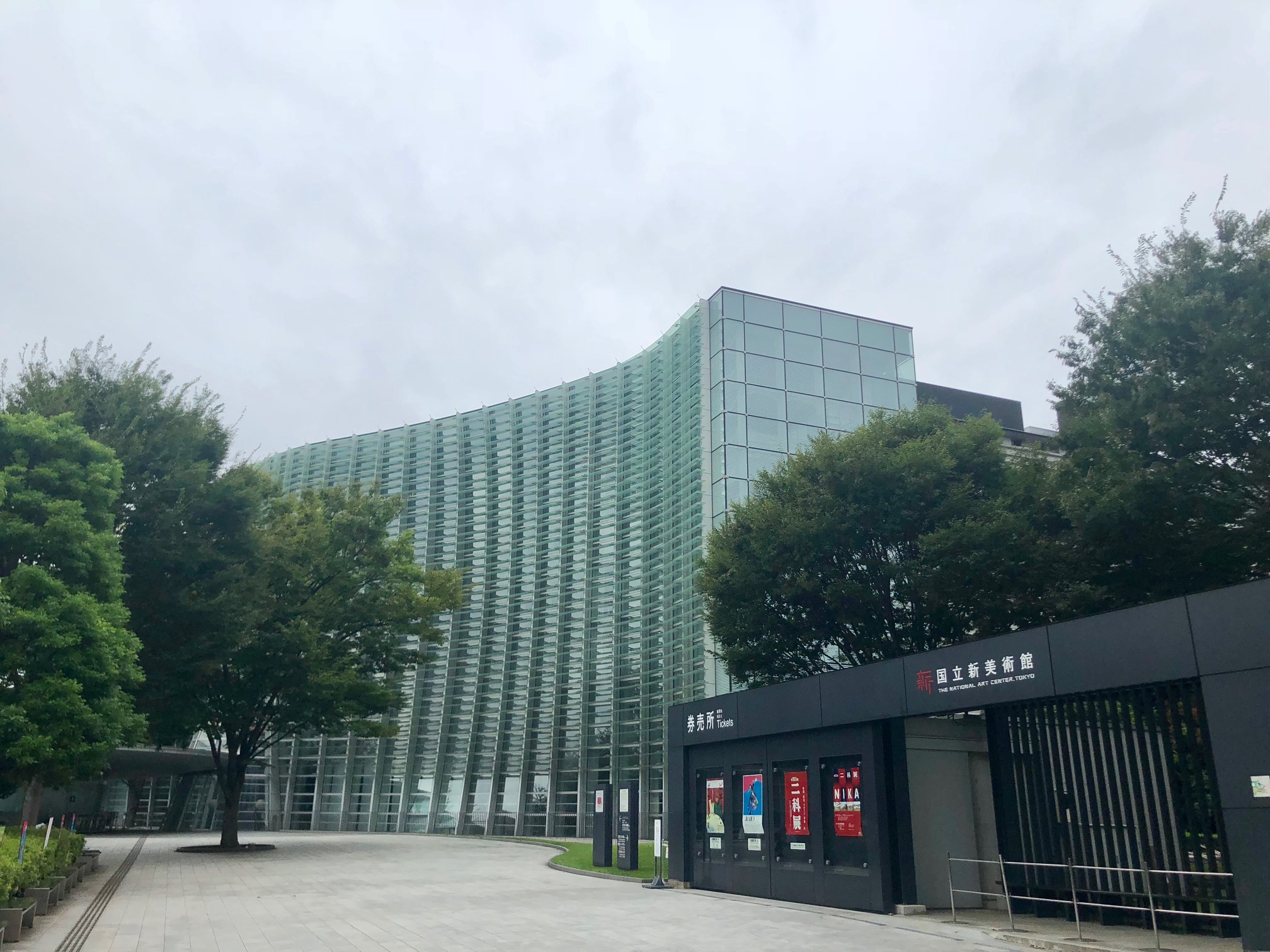 What will be in the exhibition?

The exhibit is held at the exhibition hall on the second floor of the National Art Center and will include many original drawings and text as well as some new and never before seen pieces. For people who are already fans of Jojo, the exhibit offers one corner of the exhibit, called the “Jojo Chronicles” corner, which reviews the 30-year history of the series and reminisces the characters and plots that have appeared in the series over the years. Visitors enjoy reliving the stories and remembering the details of series past. For people interested more in the story, there is another section of the exhibit called the “Star of Destiny, Blood of Fate” which aims to explore the deeper themes of the series including good versus evil and the role of fate in our lives. This section focuses on scenes of the protagonists of the series in which they had to face their own fates as well as their enemies. Finally, for those more interested in the art and design aspect of Jojo, the exhibition will include other works by leading Japanese artists Motohiko Odani, Kunihiko Morinaga, and other works from the visual design studio WOW and a special part of the exhibit focusing on “Jojo’s Design”. Other parts of the exhibition include “The Joestars vs. the Rivals”, “Stands”, and “Jojoliron,” which focuses on the newest chapter of Jojo and explores the ideas behind each story and Jojo character.

One of the most exciting features of the exhibition is the massive canvas art pieces depicting characters in a large U-shape to surround museum visitors. There are twelve canvases, each two meters high, allowing the space to immerse visitors into the scene while featuring life-sized characters and settings. All in all, the exhibit will include more than 280 original drawings to culminate over 20 years of Araki’s works. 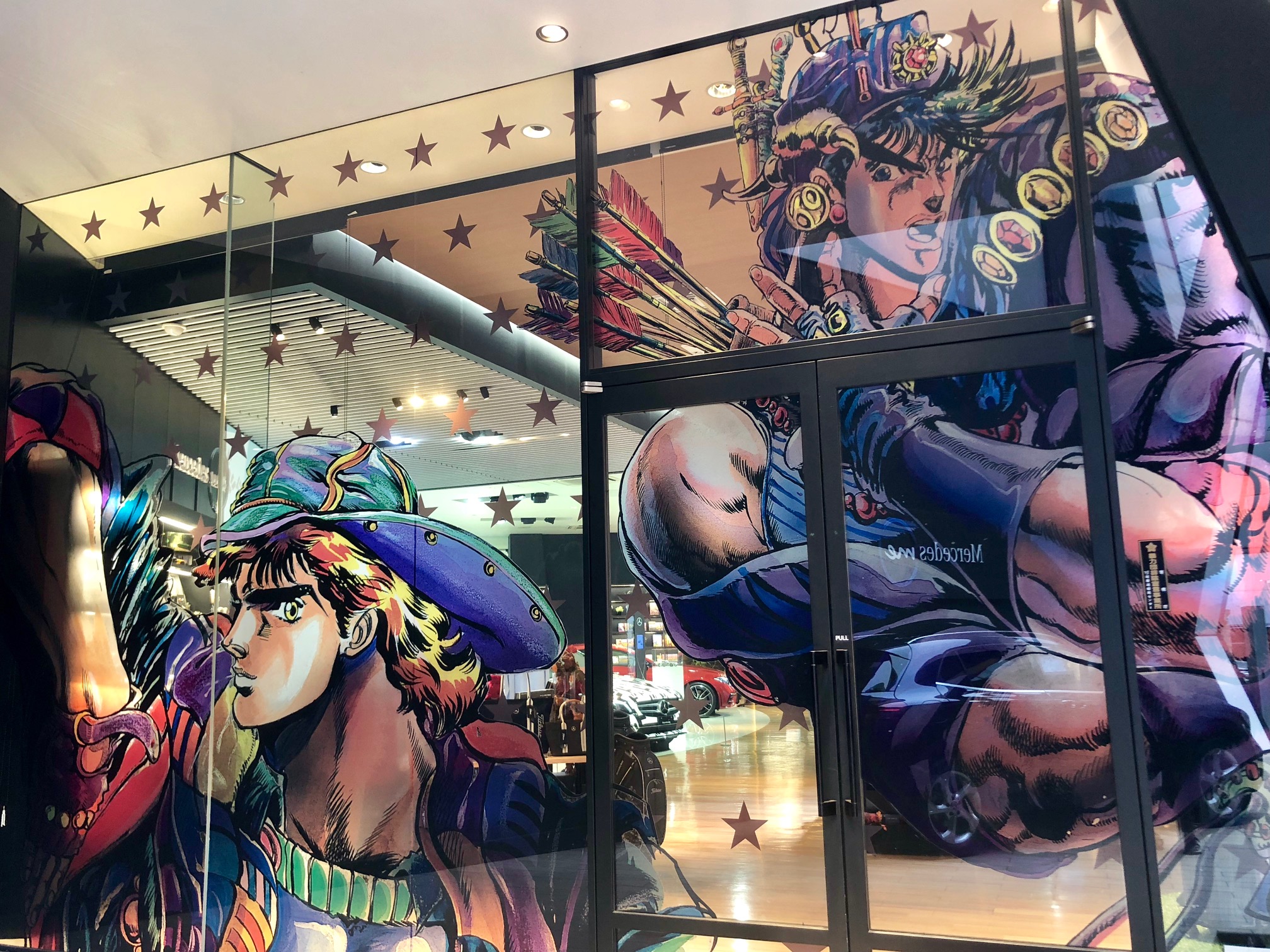 If you still aren’t convinced you should go…

This exhibit is only the second time in history that a single manga author has had an exhibit in the National Art Center, the last time being 28 years ago when Osamu Tezuka’s works were displayed. In honor of the exhibit, Araki himself dispersed handwritten flyers with his own words,

It is a very great honor for me to show the compilation of JoJo’s 30th anniversary to everyone at the honorary place. At the same time, I am also feeling nervous. What I have tried to draw in the JoJo series is ‘Growth of the Spirits’ through all the phenomena in this universe and the battles between the good and evil. This exhibition will feature images of the characters and their guardian gods gathering together at the same time and place. In addition, I am planning to offer some new drawings.

Additionally, Hirohiko Araki is one of only five artists selected by the world famous Musee du Louvre in 2009 to create original works set at the museum, for which he created Rohan at the Louvre (starring a character from Jojo) displayed at the exhibit titled “The Louvre Invites Comic-Strip Art”. Hirohiko Araki has also collaborated with Gucci on original fashion designs in 2011and drew artwork depicting the Hiraizumi ruins, which were damaged by the 2011 Tohoku earthquake, in order to raise awareness and promote reconstruction efforts. Hirohiko Araki is certainly an impressive artist and well worth getting to know while you are in Japan. 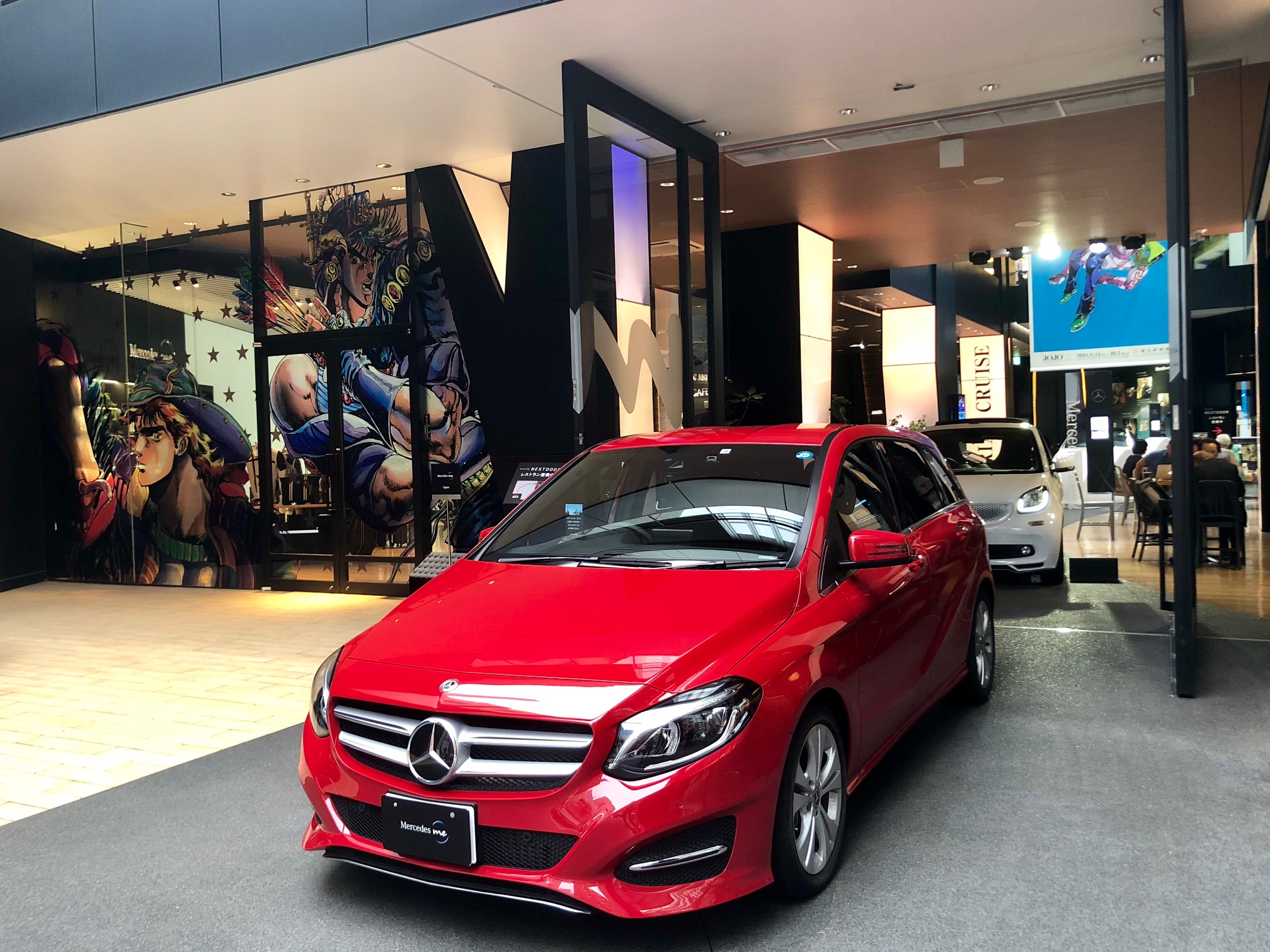 Even if you don’t like museums or don’t want to spend time in a large exhibition, you can still enjoy Jojo art in the city. There is a wall mural inside Shinjuku station which uses repeated katakana characters to depict faces of famous Jojo characters. Additionally, Tokyo’s Mercedes me store locations in Roppongi and Haneda have massive glass window displays of some of the popular characters. Mercedes is also displaying a concept Jojo-themed car for fans to enjoy for a limited time. Finally, in case you are a fan of Jojo but missed the exhibition, don’t worry! After the display at the National Art Center, the exhibition will move to the Osaka Culturarium at Tempozan in Osaka, from November 25th, 2018 until January 14, 2019. Don’t miss it! 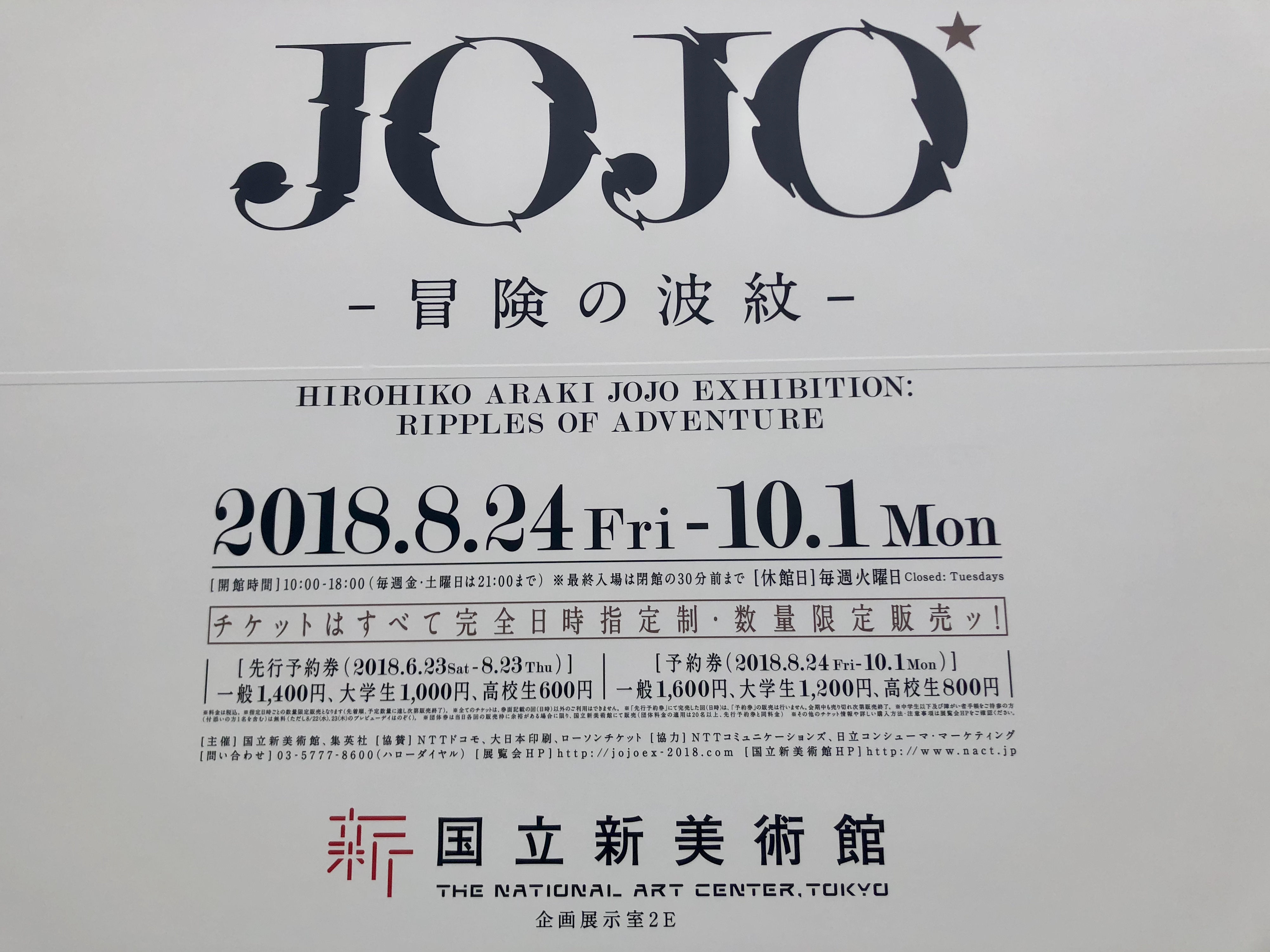