Right a second getting out of the Togoshiginza station, smell of dericous oil of ramen and yakiniku make your stomach empty and you notice that you were really hungry. 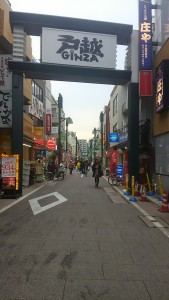 Looking just the side of right, well known in Shinagawa ward sweet shop is there. Kameya Mannen Dou. Other side of the railroad crossing, tabaco and pharmacy shops which look like existing there over 30 years are there. 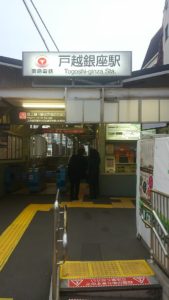 People who are over 30 years old, and living outside of this city but originally from around Togoshiginza shoutengai, will feel cozy and they are now back where they from right the moment those old but archaic shops. 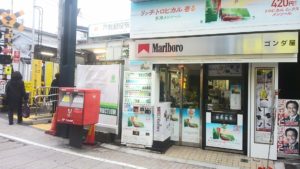 This Togoshiginza shoutengai is one the longest shopping road in Japan. It has country wide famous shops and old, local, so that looks little stylish shops like the above Tabaco and pharmacy. 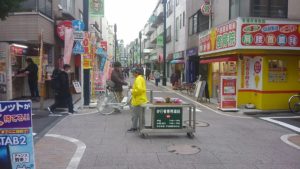 There is a primary school near the shoutengai. An old woman (50-60 years old) stand in the morning and evening ; during the time of going to school and coming home. She stands in the middle of road to prevent children being involved in road accidents. She is called Midori no Obachan ; means “Green old woman”.

However, now a days, there are enough pedestrian, traffic lights and guardrail, she is there more for greeting and watching bad manner drivers.

In the picture, she is wearing yellow gear despite the face everyone called her job “Green” old woman.

During the time author watching her, every child passed in front of her ignored perfectly even though she said “Konnichiwa” to them. The scene made the third person, like me, lonely. But that is what innocent child does, not the adults who apparently knows what to do to other people in the city. 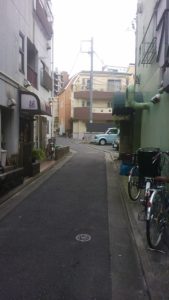 The kid running and crossing in front of the Green old woman.

From the direction the kids run towards, I could hear voice of many kids playing around. In the shoutengai, faintly Christmas music is on. But the voices of kids drown out the BGM.

I walked towards the voices and arrived small ground like the size of 1/4 of soccer ground. More than 10 primary school students were playing dodgeball, tag and DS. 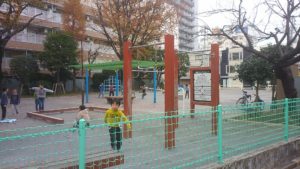 The kids who ignored the Green old woman probably wanted to join this circle of children. I was thinking of going to tell “why you were ignored to kids” but I thought probably she knew it. So I didn’t tell her.

Observing and thinking about people, making up my own story about people in Togoshiginza shoutengai are so fun. Because there are so many type of people. 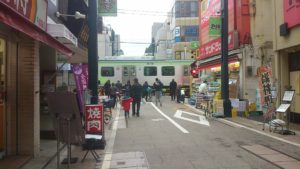 There was business man with big suit carrying suit case. Making the sound which completely drown the Christmas BGM.

The Haneda airport is very close from here; less than 30 min by train.

The Christmas was approaching then, but was he going for business trip? Or he may go back to his family since he was staying this down town because of his work. 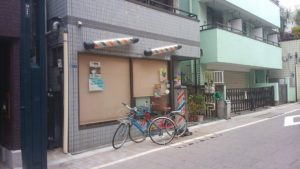 Typical sound of door ring was sounded from the hair dresser. A man who was too handsome as a hair dresser who is working in the small down town, wearing white shirt, tall like 180cm, looked like begging of 30. Old lady looked as 50 was going to home after her hair cut. He was shaking her hand. Maybe the lady uses this hair salon because of him.

Close to the shoutengai, there is the university of Medicine which was established by local big firm.

Group of 7 young people; half man, half woman who looked like students from the university went into the supermarket.

When they finished the shopping and walking towards the direction of the university, in the bag they carried, there were full of sweets and joice.

Will they have Christmas party from now?

One of the guy looked at the bill and were calculating how much one person have to pay.

He was organizing the party, maybe. I wanted to say him “do you best to look yourself good in front of girls”. He was wearing brown, oversized jacket and blackish jeans. The shoes were brownish, yellowish shoes, but I could see that were white in the past.

Shoutengai has many faces of the local place.

Walking in the Tokyo, you will find as it is very modern place, full of music and sound, and numbers of ad boards which make your eyes so painful. People are likely to visit those modern busy cities but you won’t have time to relax yourself.

Down town like those shoutengai always has Japanese kind, warm side. Even after the economic growth, relatively it doesn’t change. On the other hand, there are things which we absolutely lost. But please have a look the life level in Japan by seeing how Japanese people live and what’s there life is. You will definitely enjoy this country by experiencing those in the shoutengai.