Visiting Temples And Shrines In Japan; 13 Things To Know! | Guidable

Are you visiting Japan and doing your rounds of the thousands of Japanese temples and shrines dotted around the country? Do you live in Japan and walk past one (or three) on your way to work every morning and yet aren’t completely sure of what you’re walking past? Are you a little confused as to the etiquette expected at a Japanese temple and how that’s different to that at a shrine? Then read on!

Look no further – this quick list of the top 13 things you should know about Japanese temples and shrines will hopefully give you some more confidence in the matter!

Perhaps one of the trickiest things to know is the difference between a temple and a shrine, and how to tell them apart when you are visiting. Once you do know the difference, though, it suddenly starts to become glaringly obvious!

Religion in Japan is very multifaceted, and unlike in many countries around the world, Japanese people often do not limit themselves to beliefs in just one. Although religion does not play a major role in many people’s lives, it is very much evident in general habits, world views, mannerisms and customs, and of course in architecture and in the presence of the thousands of temples and shrines throughout the country.

Religion is entirely separate from the state, and rather than being a firm and unwavering set of beliefs or some kind of doctrine, serves more as a gentle moral guide or way of life. 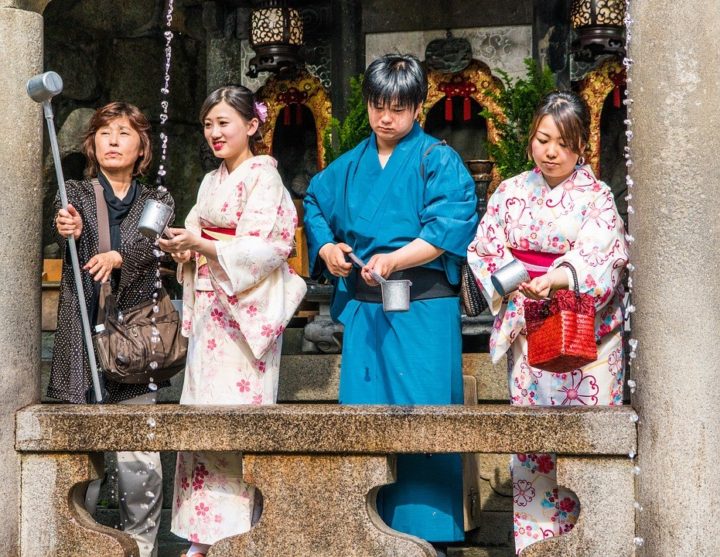 Although Christianity, Islam and other major world religions do exist in Japan, the main two by a large majority are Buddhism and Shintoism.

If you were to ask the average Japanese person you meet, they would be likely to say that they identify with a bit of both religions, participating in the regular rituals and festivities associated with the two, and visiting both temples and shrines. Furthermore, you may come across hints of both religions in either temples or shrines; in short, however, temples are Buddhist and shrines are Shinto.

2. Shintōism is a Polytheist Religion Revolving around Life and Nature

Shintōism (神道), which literally means “way of the gods”, is a very spiritual religion, with a heavy belief in numerous gods who reside in or take the form of animals, trees, stones, and other things found in nature. For this reason, Shinto shrines can often be found tucked into mossy forests or lush green parks.

One of the oldest religions of Japan, the gods of Shintōism are known as kami (神) or kami-sama (神様). Some popular forms that kami take are foxes and tanuki raccoon dogs, who are said to amble around and disguise themselves in ancient forests, playing harmless tricks on each other and on unsuspecting mortals.

The Japanese reverence of nature, which extends into their cuisine, the celebration of the four seasons, and their humility facing natural disasters, all stems from this ancient religion. 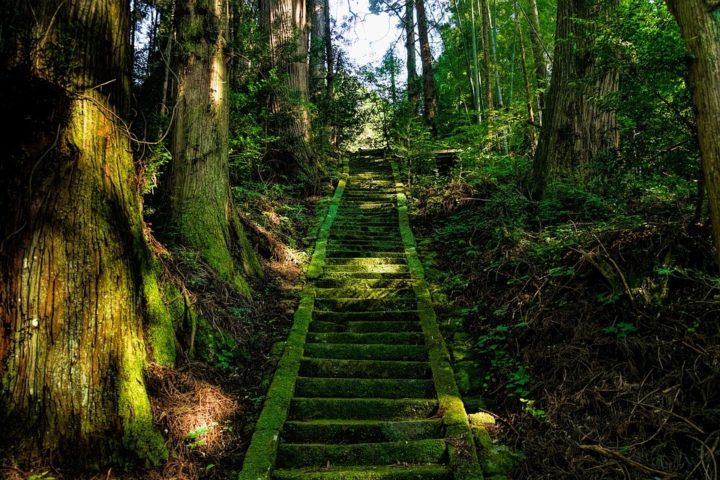 Other Shinto practices focus on trying to link present-day Japan with its ancient and traditional past. Visitors to Japan often marvel at how seamlessly Shintoism blends in with everyday life.

Households place Shinto altars in their homes to pray to, and many weddings are performed in the Shinto tradition. Almost 90% of the Japanese population regularly partakes in Shinto practices of some sort. 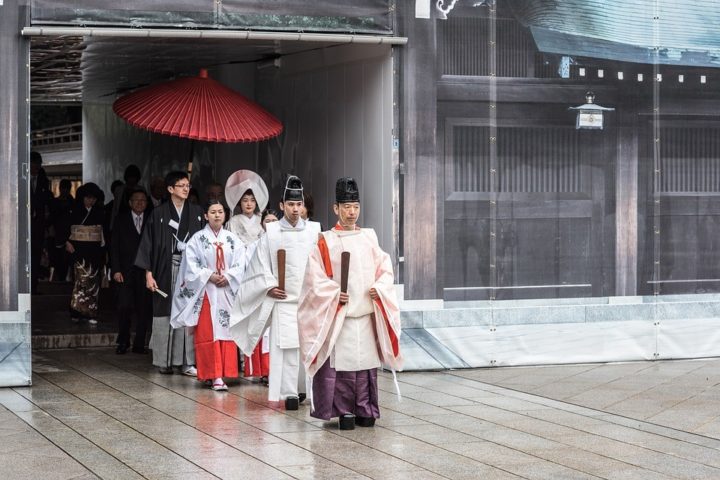 Buddhism, on the other hand, was originally introduced to Japan in the 6th century from China, Korea, and Vietnam. There are many different sects of Buddhism, the most famous and popular of which perhaps is Zen. Over 75% of Japanese people subscribe to one or more of its forms.

The focus of Buddhism lies more with the soul, enlightenment and the afterlife, which is why many funeral rituals in Japan are Buddhist rather than Shinto. People return to their ancestral tombstones to tend to them during various holidays throughout the year, the biggest being Obon in August when ancestral spirits are believed to return to the world of the living for a short period.

Other themes of Buddhism include peace, harmony, and mindfulness. Round, circular shapes – symbolic of new beginnings and smooth togetherness – are often prominent forms in temple architecture. 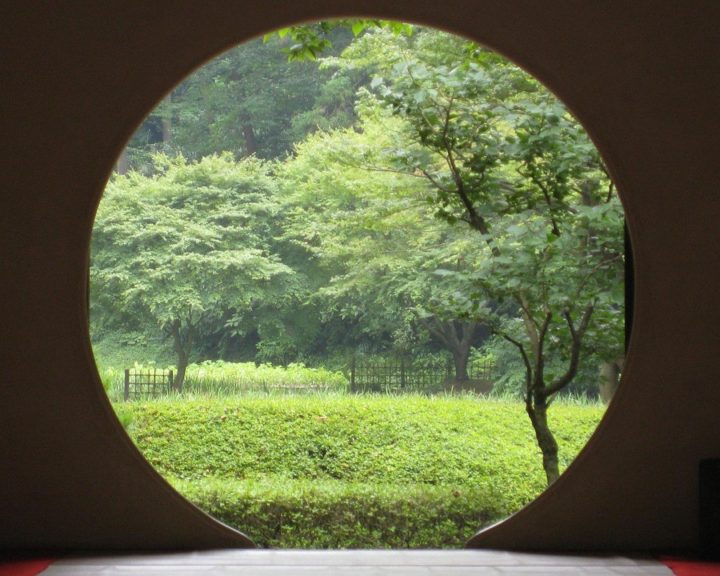 The Japanese word for “temple” is 寺, which has two readings: ji and tera (or dera). So, if you hear a name that ends with either of these sounds, it is likely to be a Buddhist temple. Some examples include Kinkaku-ji, the Golden Pavilion Temple and Kiyomizu-dera in Kyoto, or the famous Sensō-ji in Asakusa in Tokyo. 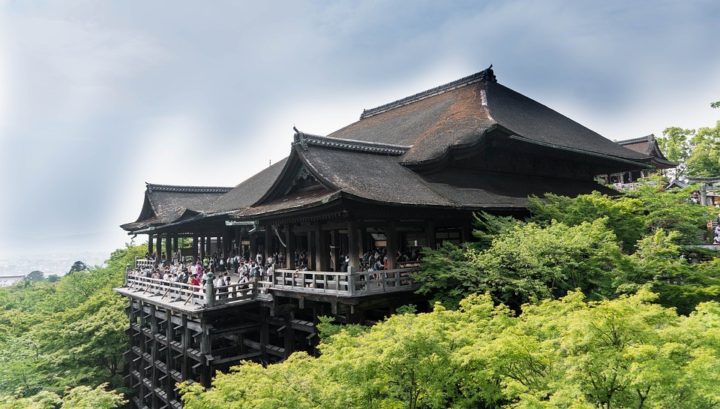 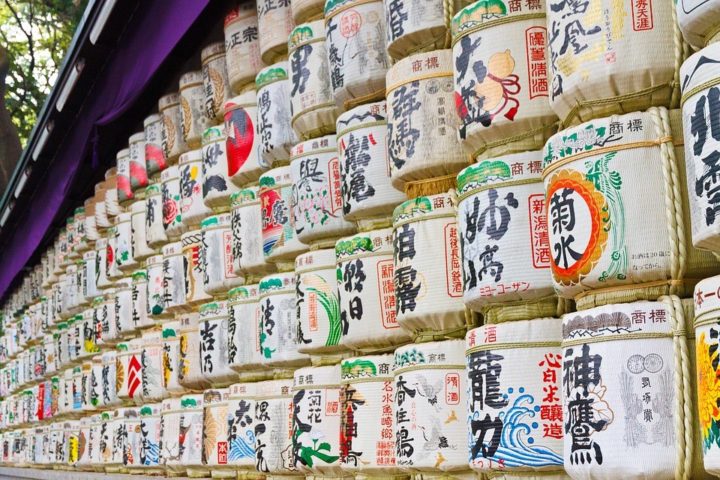 There are a few giveaways that make telling the difference between a temple and a shrine easy enough for the trained eye. Let’s start with Buddhist temples. An obvious pointer is the presence of a Buddha statue, often plated in gold or bronze and sitting serenely inside the main temple hall.

These Buddhas are sometimes enormous, spanning tens of meters in height, with some of the most famous larger structures located in Nara and Kamakura. Some temples also house many numbers of them, cradling the symbolic lotus flower or a spiritual musical instrument in the clouds. 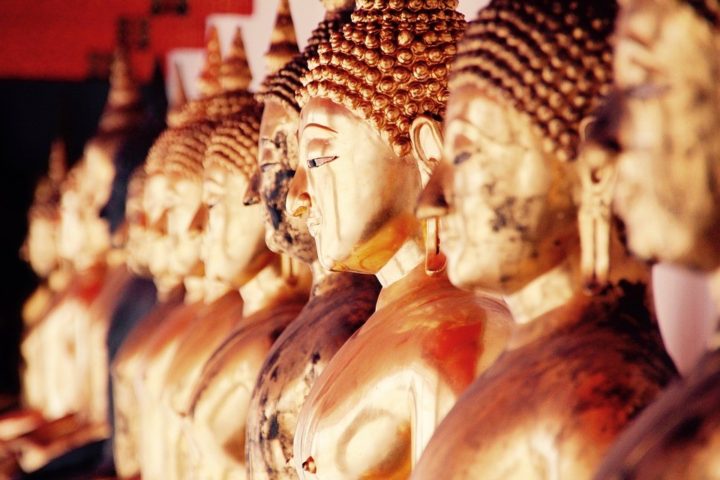 Another form taken by the kami gods of Shinto is koma-inu (狛犬), a mythical lion-dog that guards the entrance of Shinto shrines and sometimes also private homes and businesses.

Similar in appearance to the shiisaa lion-dog statues that are particularly ubiquitous in Okinawa, koma-inu comes in pairs and stand at either side of the shrine’s entrance or hidden away inside the shrine buildings. One of the dogs usually has its mouth open, and the other has it closed. At some shrines, foxes stand guard in place of lion-dogs. 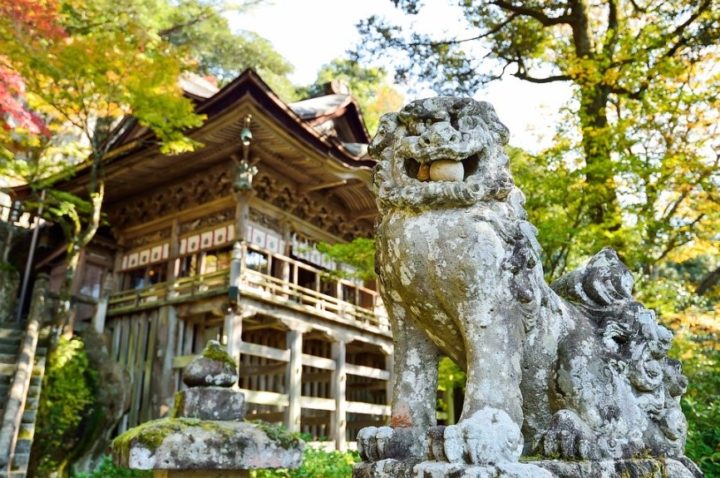 Another thing to look out for is a large pagoda, which should be immediately visible from the outside. The architecture of these pagodas carries Chinese influence and can be similar also to those you can see in Thailand and other Asian countries.

With their curled roofs, spires, and intricate tiles, many of these pagodas have multiple levels and tower above the surrounding precincts and buildings. 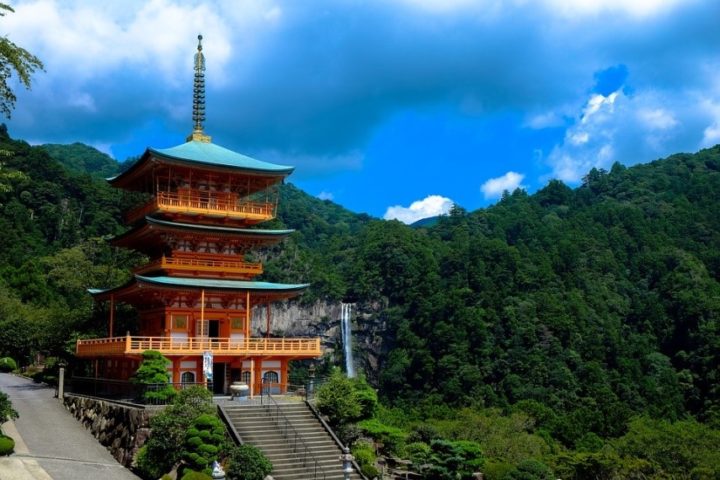 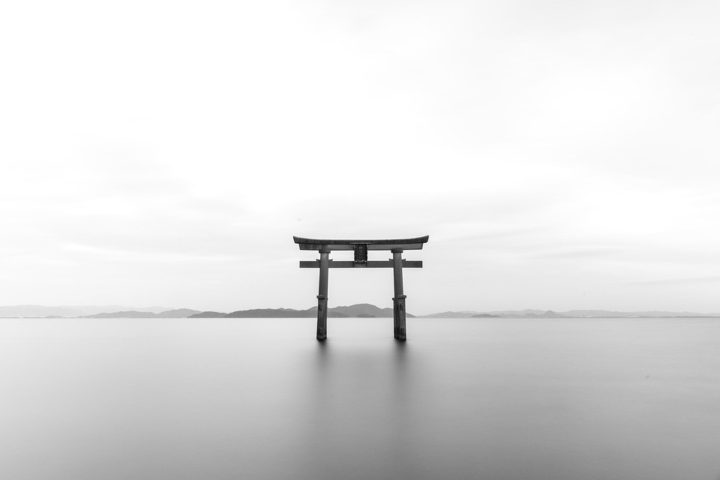 Torii gates come in many sizes, colours and styles, but are often painted a brilliant vermillion and shiny black. One example is the stacks of thousands of gates donated for good fortune by and engraved with the names of companies at the world-famous Fushimi-Inari Shrine in Kyoto, which is also a UNESCO World Heritage Site. 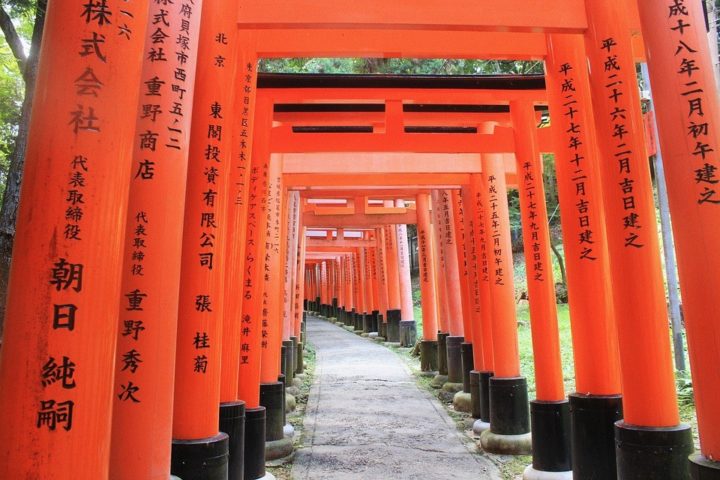 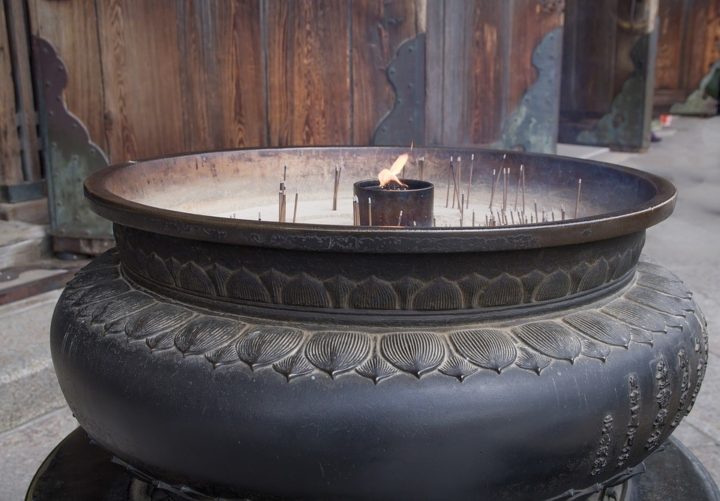 When approaching a shrine, bow as you walk through the torii gate. As you walk down the path, try and stick to the outside, as the middle is traditionally reserved for the kami gods.

You should also see a basin of water near the entrance. Use one of the ladles and pour water over your left hand and then your right to cleanse them, making sure the water does not fall back into the trough. Next, pour water into your left hand and rinse your mouth. Tip the ladle towards you to clean the handle for the next person. 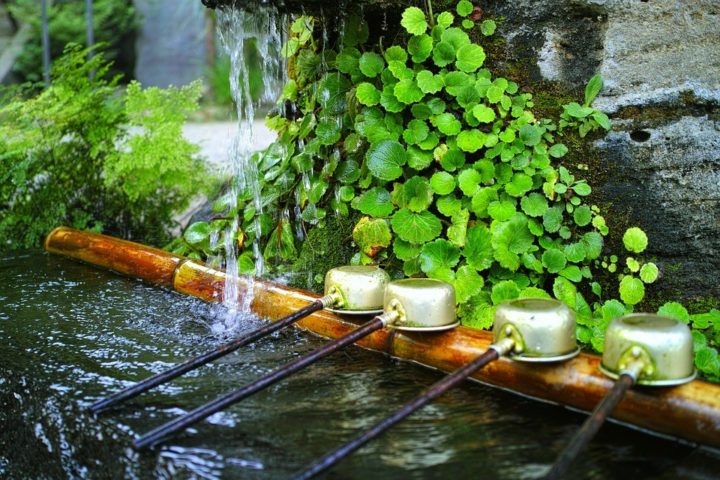 At the main shrine altar: if there is a bell attached to a rope, shake the rope to ring the bell (ringing the bell is thought to call the attention of the kami to you so they can answer your prayers). Next, toss a coin into the wooden box for good luck (ideally a lucky 5 yen coin!) before finally bowing slowly and deeply twice, clapping twice, and bowing once more.

Both temples and shrines often have fortune slips or lucky charms that can be purchased for a few hundred yen. For an omikuji fortune slip, read your fortune and if it doesn’t sound very good, simply tie it to the prepared tree branch or wooden frame nearby so that it can be purified by the priests or monks!

Lucky amulets are also sold at both temples and shrines, and you can often find ones specific to different things. For example, there are amulets for love, travel, exams, or safety in travel. Another type of lucky charm are ema wooden boards, where you can write out your heart’s desires and hang them up to be noticed by the gods. 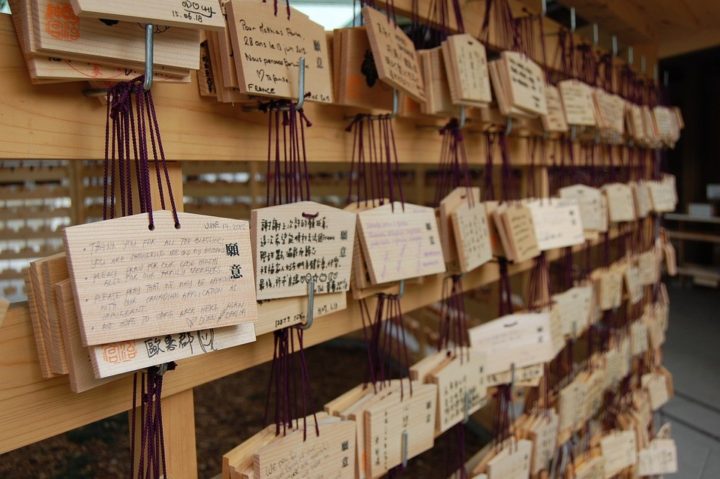 When entering or leaving a temple or shrine, if there is a wooden step as you walk through any entrance or gate, be sure not to step on it or touch it with your feet, as it symbolizes a spiritual boundary.

When visiting a temple or shrine, however, the most important thing is to remain respectful and quiet, as even the bigger more touristy locations are ultimately still places of worship for both locals and visitors alike.

It is usually fine to take photographs outside, but try to avoid glaring flashes and make sure to get permission before snapping pictures of people including other visitors, monks, priests or shrine maidens. Photography is normally prohibited inside the temple and shrine buildings.

Recent estimates suggest that there are over 158,000 temples and shrines scattered around Japan, tucked into mountainsides, along beaches, in residential neighbourhoods and even in busy shopping arcades! Their serene, beautiful architecture and atmosphere often appear largely untouched by the hustle and bustle of the 21st century.