Have you ever walked into a forest and felt refreshed or relaxed by even just strolling around in a park with trees? If so, you’ll understand the idea behind shinrin yoku!

What is Shinrin Yoku?

“Shinrin yoku” is the Japanese practice of walking or hiking in forests or woods; by engaging in deeper contact with nature, we earn a sense of calmness and tranquillity.

In shinrin yoku it’s believed that forests and trees have the power to heal us and help us become healthier.

What is the Origin of Shinrin Yoku?

The word “shinrin yoku” (森林浴), written with the ideograms of “forest” and “bathe”, was used for the first time in Japan in the 1980s, by the chief of the Forestry Agency.

During a period of intense economic growth and within a society known for its stressful working environment, the practice of shinrin yoku started in the 80s as both a physiological and psychological way to release stress – we could say a sort of antecedent of the modern and trendier practice of mindfulness.

At the origin of the shinrin yoku philosophy in Japan is the idea that forests have a unique “aroma” and a particular air that is filled with phytoncides, volatile substances with sterilizing and antimicrobial power, that kill bacteria and toxic microorganisms we can smell and breathe.

Being in the forest not only makes us healthier by purifying the blood and expelling toxins but helps us psychologically by reducing stress.

Why Did Shinrin Yoku Start in Japan? 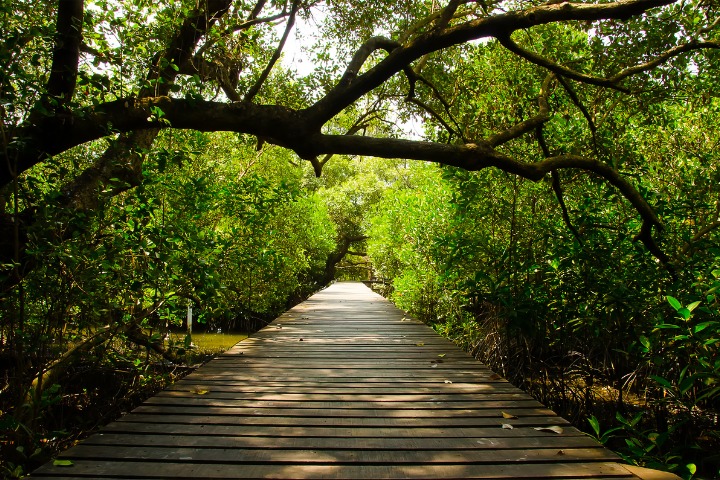 Why are the Japanese so sensitive about the physical and mental connection with nature?

Many scholars consider the Japanese to have a peculiar and particular sense of nature: “Unlike the West, nature is not conquered or an object to be conquered, but rather the Japanese believe that nature and humans are equal in existence”.

In addition, at the root of the Japanese concept of forest bathing is that you don’t have to be deep down in a forest to be able to enjoy its benefits.

An international survey on attitudes toward forests conducted by the Japanese Forest Environment Research Institute revealed that Japanese people are characterized by a preference for open, human-influenced nature, such as “mountains with a good view” and “highland pastures,” rather than the “deep forests” favored by Westerners.

What is Forest Therapy?

The term “forest therapy” is quite new if compared to “shinrin yoku” and came to use for the first time in 2004, again, in Japan. It can be considered a more science-based evolution and recent development of forest bathing.

The Forest Therapy Society was founded shortly after and has started conducting research on woods, roads, and green areas that have been proven to have healing effects through physiological and psychological experiments and are certified as suitable for forest therapy.

The certification for places to be defined as suitable for forest therapy has begun in 2006 and, as of today, Japan has developed a network of 63 designated places for forest therapy (called “Forest therapy bases” and “therapy roads,” which have been tested in comparison with the psychological effects of urban areas).

The major difference from simply hiking in the mountain is the emphasis on spending time in the forest. Plazas, benches, restrooms, and rest facilities are sufficiently arranged to allow visitors to relax and enjoy the forest. 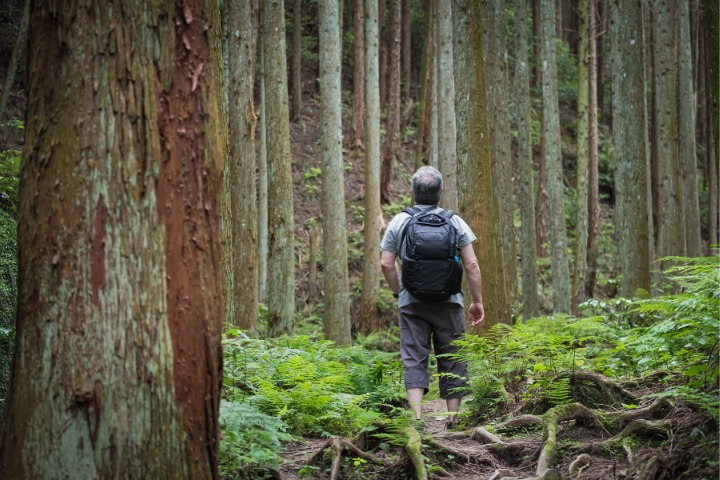 In addition, while forest bathing just describes the practice of immersing oneself in nature while being more mindful and can be done by anyone without any certification, forest therapy, on the other hand, is always conducted by a certified professional. It involves knowing psychological counseling as well as the ability to handle patients with different types of mental health problems. It is most effective when carried out on a one-to-one basis or in very small groups of people with similar issues.

Forest therapy incorporates practice such as breathing exercises, Nordic walking, yoga, aromatherapy while being in the forest.

The Forest Therapy Society (also available in English) website is an extremely helpful tool if you want to know more about forest therapy and if you want to try it for yourself.

Mountains and woods can be scary and intimidating at times, but the purpose of shinrin yoku and forest therapy is to conquer this fear and make nature more accessible to humans who are forgetting quicker and quicker how being in contact with nature makes us happier.