A Guide to Old Tokyo: Walking in Natsume Soseki’s Steps

Natsume Soseki (1867-1916) is one of the most famous writers of modern Japanese literature: from 1984 until 2004 his picture was even printed on the 1,000 yen note. He was born in February 1867 in Tokyo, and spent much of his life in what is now the Shinjuku ward. His famous books include I am a Cat, Kokoro, Sorekara and Botchan.

Why are there so many Natsume Soseki spots in Tokyo? 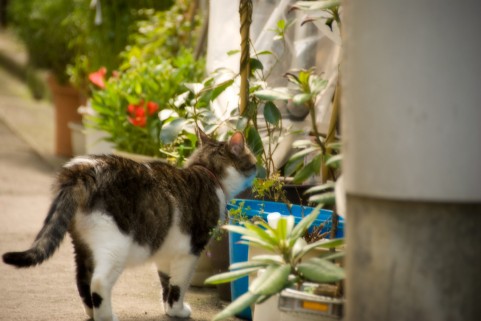 The Natsume Soseki Museum opened in September 2017, on the 150th anniversary of his birth. The Museum is next to Soseki Park, along the Soseki Sanbo dori street in Waseda. Soseki Park is the location of Soseki’s final house, where he lived from 1907 and wrote books such as Sanshiro, Korekara and Kokoro.

The cat theme is echoed in the Museum itself, with the course through the exhibits marked by a small black cat, and tiles with cats on them leading the way to the front door. Soseki’s novel I am a Cat is famously narrated by the eponymous cat himself, and the space humorously reflects this famous (and cute) literary character.

The museum contains a small free exhibition area offering an introduction to Soseki in Japanese and English, alongside a paid area featuring a reconstruction of the writer’s living room and displaying manuscripts, books, and photographs from the time. The museum also offers an English audio-guide for non-Japanese speakers.

West of the park is Natsume-zaka (zaka meaning hill), named by Soseki’s father after their family. Along the Natsume-zaka is a monument to Soseki’s birthplace at Kikui-cho, set up in 1966 (1 Kikuicho, Shinjuku-ku), and the slope leads from Kikui-cho to Wakamatsu-cho. The neighbourhood itself is full of old temples, quiet shops and cafes and is well worth taking the time to explore.

Within the Natsume Soseki Museum is Cafe Soseki, one of my new favourite cafes. Continuing the cat theme, the cafe has a black cat as a logo and serves dishes inspired by the writer himself. Cafe Soseki is particularly great for fans of Japanese sweets, offering a small selection including monaka and yokan sets, besides persimmon ice cream. The cafe also sells a selection of branded gifts and coffee beans that would make a thoughtful present for literature and cat fans alike.

Soseki’s grave is in Zoshigaya Cemetery, one of the three largest cemeteries in the centre of Tokyo that was established in 1874. Like the two other major cemeteries in central Tokyo, Yanaka and Aoyama, Zoshigaya is home to the graves of numerous famous figures from Japanese history.

Besides Soseki, other famous literary figures from the past memorialised in Zoshigaya Cemetery include novelist Nagai Kafū (1879-1959), academic Lafcadio Hearn (1850-1904) and Izumi Kyōka (1873-1939). The cemetery itself is vast, and although it is possible to get a map from the office with the famous graves marked on it, this is only available in Japanese and the graves themselves have no distinguishing markers. However, as the cemetery is a popular tourist spot it is usually possible to tell where someone famous lies by following the crowds.

4. Around the Toden Arakawa Line 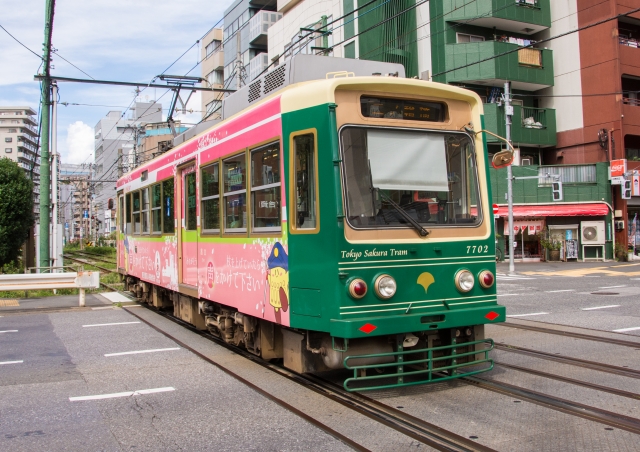 The neighbourhood of Zoshigaya itself is quiet and seems off the beaten track, particularly when compared to its next-door neighbour Ikebukuro. Zoshigaya is also famously connected to artist Tezuka Osamu, creator of Astro Boy, who used to live here. There are numerous quiet cafes and bakeries dotted around the neighbourhood, including coffee-shop Kiazuma Coffee located in a beautiful old building. The shopping street leading up to Kishimojindo temple has many interesting small shops. For those looking for old books, also recommended is Kosho Ouraiza. And for those interested in old western-style buildings in Japan, Zoshigaya is also the site of the Zoshigaya Missionary Home, built in 1907.

The area around the Toden Arakawa line is full of interesting side streets, small businesses and cafes ranging from traditional Japanese sweets (wagashi) to coffee, melon pan and soba. The Toden Arakawa line opened in 1911, and is the only streetcar left in Tokyo – and as such, it offers a slightly nostalgic look back into the past. It’s possible to explore these streets without having any particular goal in mind as you are sure to come across interesting sites off the beaten path. 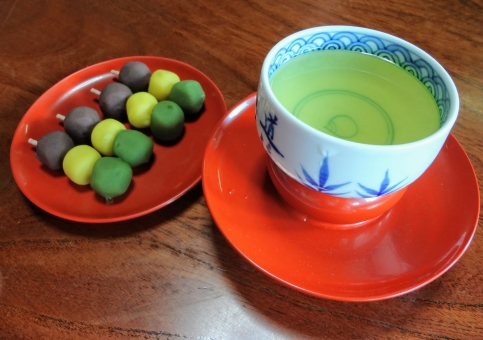 One neighbourhood frequented by Soseki was Kagurazaka, an area that he also wrote about in his work. Kagurazaka is close to Iidabashi and the river, but in its winding streets it seems vastly different from its busier neighbours. In the Edo period, Kagurazaka was just outside of the outer moat of Edo Castle, and there are occasional traces of this history dotted throughout the neighbourhood.

Kagurazaka is the home of numerous old-fashioned sweet and food shops, bakeries, bars and izakaya, alongside trendy designer fashion and furniture. Le Kagu is a shop and café, selling the latest fashion, accessories and interior goods. Le Kagu also often hosts events and farmers’ markets and is a recommended stop on any trip to Kagurazaka.

The area is also home to many temples and shrines, including Akagi Shrine. The shrine was recently renewed in 2010, and now presents a satisfying blend of old and new in its new design. ‘Akagihime no Mikoto’ is enshrined at Akagi shrine, and as the god of good relationships many come to the shrine to pray for success in love. You can buy an enmusubi bracelet from the shrine to power up your luck in relationships – once your wish has come true, the bracelet will fall apart naturally.

Every November, the district hosts the Kagurazaka Street Stage O-edo Tour. The festival showcases different traditional Japanese performing arts, including shamisen players, concerts and dancing. But in Kagurazaka the old always seems to meet the new, and the neighbourhood is also home to a large number of French themed cafes and bistros.

Kagurazaka can be reached by the Kagurazaka Station on the Tozai line, the Ushigome-Kagurazaka station on the Oedo line, or is a short walk from the nearby Iidabashi station (JR Chuo, Oedo, Yozai, Yurakucho and Namboku lines).

The Shinjuku Historical Museum is a small museum dedicated to the history of the Shinjuku area. The exhibits stretch back to the ancient past – the Jomon (10,500-300 BCE) and Nara (710-794 AD) periods – right up to the recent past, also focusing on Edo and Meiji era Shinjuku. For those interested in how Shinjuku developed into the busy area it is now, and what it might have looked like before, this Museum offers a good snapshot of the past.

Besides old photographs, artifacts and even reconstructions of early Showa-era buildings and a streetcar, the museum also has a permanent section dedicated to literature. Soseki is not the only literary figure associated with the area, although he does feature heavily. Original manuscripts, letters and other objects belonging to the writers are displayed here. 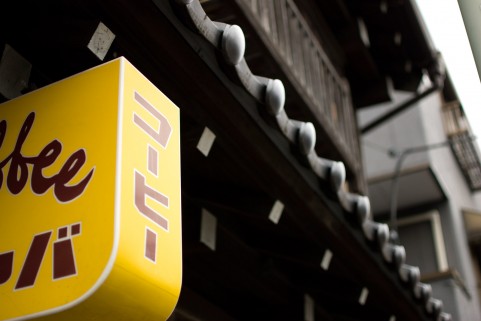 Outside of the Shinjuku area, Soseki also lived in the Sendagi area. Sendagi, alongside its neighbouring districts of Yanaka and Nezu – jointly known as Yanesen – are full of winding streets and small, independent boutiques. For those looking for a taste of old-fashioned Tokyo, these areas are the perfect way to step back in time.

Yanesen lines east of Ueno Park, and is easily walkable from the park. Yanaka Ginza is an old shopping street, that can either be reached by walking from Ueno or from the closer Nippori station. The way to the shopping street passes by the earlier mentioned Yanaka Cemetery, which is a famous cherry blossom viewing spot in the summer.

The area is also famous for its second-hand bookshops, temples and art gallery Scai the Bathhouse which is housed in an old public bathhouse. The cat theme from the Natsume Soseki Museum is also present here, with cat statues lining either side of the shopping street and real-life feline inhabitants snoozing on nearby walls. Yanaka is also famous for Yanaka Coffee, and for sculpture fans, there is the Asakura Museum of Sculpture (9:30-4:30, closed Monday and Friday).

Nezu is well worth a visit for Nezu Shrine, a beautiful old shrine perfect for taking photographs of the red torii gates for those who can’t make it to the more famous Fushimi Inari in Kyoto. But whichever way you turn in these three neighbourhoods, there is bound to be something interesting just around the corner.

For the real Soseki fans, there are other places you can trace the writer throughout Japan. Close to Tokyo, located in the Yamate (the Bluff) district of Yokohama, is the Kanagawa Museum of Modern Literature. The museum frequently hosts exhibitions dedicated to certain writers (such as Terayama Shuji and Inoue Hisashi, but it also holds a permanent collection including a writing set that belonged to Soseki.

The Kanagawa Museum of Modern Literature can be reached from the Motomachi-Chukagai station, and is right next to the Harbour View Park. For those interested in the past, particularly in the Meiji period, the park contains old western-style buildings that used to house foreigners living and working in Japan. Each of the buildings is free to enter, and they offer a stamp rally for those who want to get the complete set. Also nearby is the reconstructed Gaiety Theatre, the first western-style theatre in Japan, now housing a small cafe and exhibition, and the Foreigners’ Cemetery (dating back to 1854).

Further away is Meiji Mura, or the ‘Meiji Village’, in Nagoya. A kind of ‘theme park’ particular to Japan, Meiji Mura is an open-air museum containing over 60 buildings constructed during the Meiji era that have been dismantled, moved to Nagoya and rebuilt on the site. Soseki’s home (built 1887) has been moved here.

For fans willing to travel west of the country there are several famous spots in Matsuyama, Ehime Prefecture to visit. He wrote one of his most famous works Botchan while living in Matsuyama so several places of the era feature in his story.  Possibly one of the most prominent being the public bath ‘Dogo Onsen’, which today offers different bathing courses open to the public. 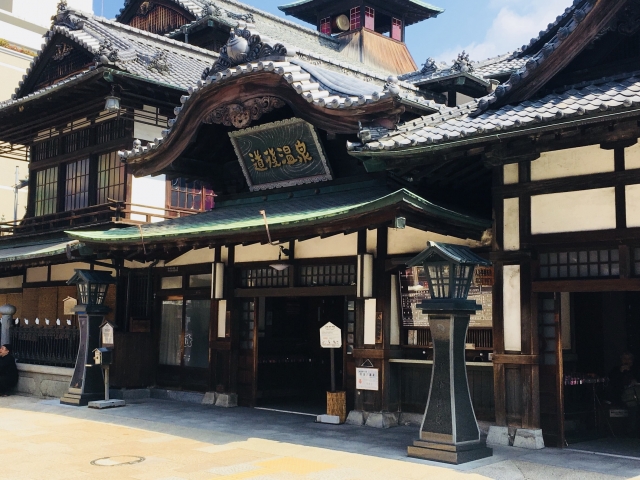 The buildings and areas described here are ideal places for those who want to get a sense of ‘old Tokyo’, or who want to step off the more popular tourist path. Each neighbourhood has its own distinct feeling, and it is possible to come across intriguing sites in their nooks and crannies – it might be an idea to ditch the map and see where the streets take you!

For those interested in the past and in Natsume Soseki, be sure to check out these areas.

Dive deep into the Japanese artwork after the literature to further understand the cultural framework: